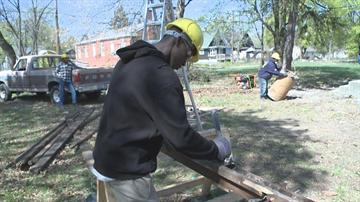 BENTON HARBOR, Mich. - The demolition of blight is becoming a teaching tool in Benton Harbor.

Thanks to the NSP II federal grant Benton Harbor received, about 300 abandoned and foreclosed homes are coming down by 2013 and a new program is maximizing its potential.

“What they’re doing is taking apart pieces and the 4x4s we’re going to save,” said LaTroy Myers, a Bridge Academy student, giving a tour of the construction site Wednesday.

An old abandoned building on Pearl Street he and his classmates are demolishing by the end of the week.

“They’re taking apart this house but what’s actually going on is job training,” said Chris Fielding with Michigan Works. The project was his idea.

Michigan Works knew Berrien County was demolishing hundreds of buildings in the city anyway, so why not use a few to teach construction and soft job skills.

“I had no clue about construction,” said Shamoria Patton, a student working on site. “I thought it was like my nieces and nephews watching ‘Bob the Builder’. One swing and the whole wall falls.”

Patton, who hadn’t really ever picked up a hammer, now is getting certifications that’ll land him a job in any construction site. “They can learn how to put a house together by taking it apart,” said Fielding.

The program is not just limited to Bridge Academy anyone who wants the training can get it. Fielding said the program also builds pride in the community.

“I’m learning things because I have the motivation and determination,” said Myers. Once these houses come down he’ll be looking for a construction job.

Sign up for the program is at the Michigan Works building on Main Street in Benton Harbor. The last days for training are in early April.