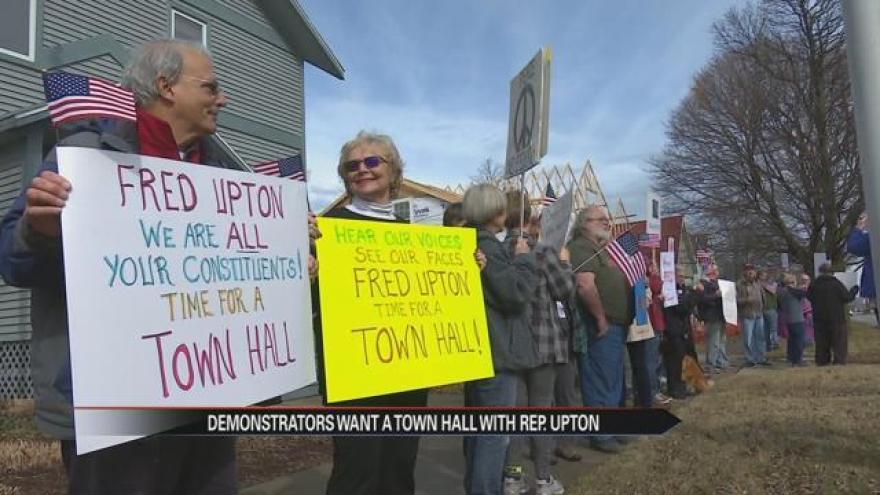 “There are so many things going on in this country at the minute that people would like to talk to their elected representative,” organizer Duncan Kime said.

“We want Fred Upton to hold a town hall!” demonstrator Dr. Larry Feldman said. “It’s been way too long and people have important questions they want to ask and they want to hear his answers.”

Demonstrators have gathered outside Upton’s office every Tuesday since Donald Trump was sworn in as president.

But Tuesday’s demonstration was specifically geared toward Upton and making a town hall happen.

“We’re in a precarious time in government right now and he needs to go back [to Washington] with a view that is informed by his constituents,” demonstrator Melinda McMullen said.

McMullen and Kime presented Upton’s staff with a petition that had been signed 647 times asking the congressman to host an in-person town hall in each county he represents.

Upton’s staff would not let media inside to film the encounter, but Kime said beyond accepting the petition, no progress was made.

Many demonstrators said they are upset with Upton because they believe he’s embracing Trump’s presidency and his cabinet nominees.

They want face time with Upton; many saying they plan on demonstrating weekly until a town hall happens.

“None of us wants to spend every Tuesday – in rain, sleet and snow – standing on a sidewalk,” McMullen said. “But we will have to do that if that’s what we have to do in order to get our message to him.”

Upton spent Tuesday in Kalamazoo meeting with constituents, but his spokesman sent a statement saying, in part:

"Unfortunately, political discourse has coarsened to such a degree that these sorts of town halls have become crazy circus atmospheres. Fred feels it's much more constructive and beneficial to hold smaller sessions with a wide variety of folks to discuss the issues, specific legislation, and ways Fred can be an effective, bipartisan leader."

The spokesman, Tom Wilbur, also sent a clip from an interview Upton gave Tuesday morning where he explained he’s been hosting tele-town halls for the last six years.

In the interview, Upton said he feels the tele-town halls are more productive because they don’t require spending money on a venue or security, and he can conduct them with his constituents even while he’s in Washington.

But demonstrators at Tuesday’s event said the tele-town halls are not enough.

McMullen said she’s had trouble finding out when they are, as well as gaining access to them. And she said she and her fellow demonstrators prefer to meet with Upton face-to-face because he’s veiled by technology in the tele-town halls.

Demonstrators also said it’s frustrating that the tele-town halls only allow people to press a button to agree or disagree with Upton’s answer or question he gives in response.