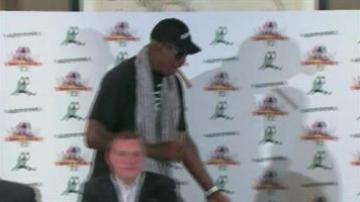 United States basketball star Dennis Rodman has lost a major corporate backer as part of his efforts to stage a game in North Korea next month.

It is unclear whether the former NBA star will be taking an American basketball team to North Korea for an event after the company funding it announced it was pulling out.

The company says it has withdrawn its name because of the negative backlash of being associated with the North Korean regime.