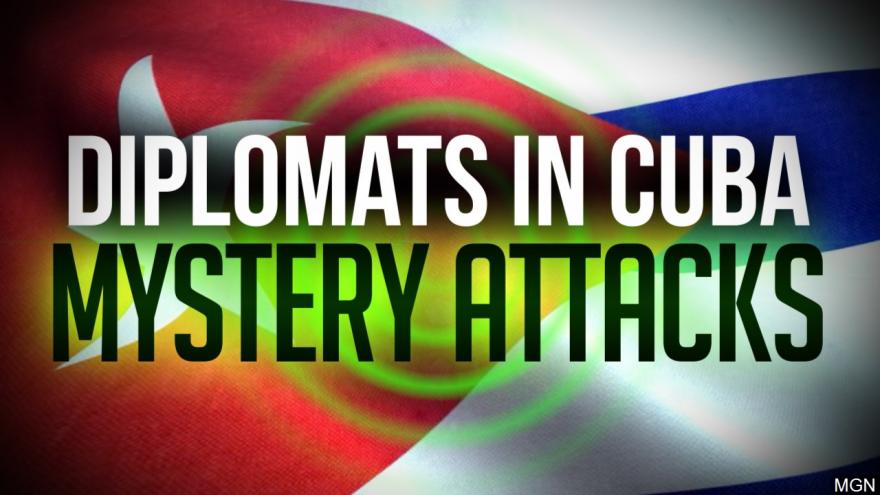 (CNN) -- The Cuban government apparently named for the first time some of the US diplomats who suffered health problems as a result of a series of mysterious incidents in Havana that US officials have described as attacks on their personnel.

The names of nine people identified as US diplomats were shown briefly on Cuban state-run TV Thursday night during a half -hour program on the incidents that have caused US-Cuban relations to sink to their lowest point in years.

In the April 2017 letter shown on TV, officials from the Cuban Interior Ministry-- the agency investigating the alleged attacks-- requested information from a government hospital in Havana that treats foreigners on whether any of the nine US diplomats named in the letter had received care there.

The letter --one of several documents shown on the program-- asks hospital officials if the diplomats were ever treated for "hearing and neurological ailments, which could be linked to harm to their auditory system from being exposed to levels of sound affecting their health."

The State Department had previously said US officials wanted to keep the diplomats' identities confidential.

On Friday, a State Department official refused to confirm the authenticity of the information released in the video and said that the release of the names was a distraction from the effort to solve the mystery of how the diplomats fell ill.

Cuban officials did not respond to CNN requests asking why the names were released in what is merely the latest twist in an already baffling diplomatic mystery.

The Americans found that if they left the rooms they were in, the symptoms and sounds immediately stopped, suggesting to them that they were being targeted by an incredibly precise weapon.

The Cuban TV program also showed a March 2017 document titled "Medical Summary" that the program said had been provided by the US government to Cuban officials.

The document --the first time US government health records on the case have been released- stated that of the then 20 diplomats that had been examined by US medical teams, two had severe symptoms, nine had moderate symptoms and nine showed no symptoms at all.

"Some reported hearing a high pitched sound, other did not," the summary said of the alleged attacks on the diplomats. "This may be explained by the fact that some tend to lose their high frequency hearing ability as adults. Some reported feeling a vibration with and without an accompanying sound."

While some US officials have said that sonic weapons could have been used in the attack, experts on the technology have told CNN that they know of no device that inflicts the symptoms described.

Cuban officials said the island's government did not possess any such weapons and could find no evidence they had been used against the diplomats by a third party.

In September, the State Department ordered all non-essential personnel and diplomats' families to leave Cuba and issued a travel warning on Americans visiting Cuba. In October, the US also expelled 15 Cuban diplomats from Washington.

For months US and Cuban officials have talked past each other as the impasse over the attacks deepened, a diplomatic note from the Cuban Foreign Ministry to the US Embassy showed.

"The Ministry maintains that neither the government of Cuba, nor any of its institutions have carried out nor would carry out attacks of any kind," the Cuban diplomatic note reads, "Including the acoustic ones the embassy alleges have taken place."

The note --which was also aired on Cuban state TV-- concludes by saying that Cuban president Raul Castro had personally denied any Cuban role in the incidents during a February 21 meeting with then head of the US embassy Jeffrey DeLaurentis.

While US officials say they don't know who is behind the alleged attacks, they have called on Cuba to do more to stop the incidents.

But according to the Cuban state TV program, the incessant, high pitched chirping of crickets and cicadas near the diplomats' homes in Havana could be to blame for the sounds the Americans heard and their physical symptoms.