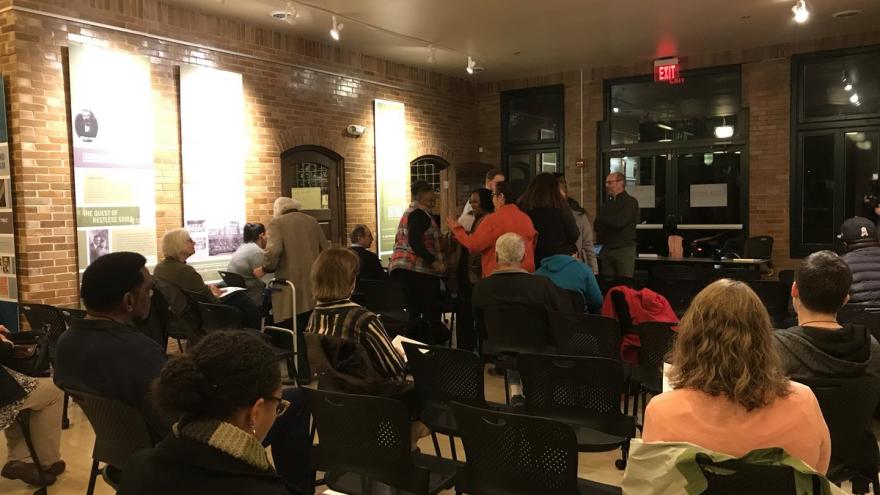 SOUTH BEND, Ind.—The community voiced their frustrations with the public school system at a forum with a representative from the Department of Justice on Wednesday.

The meeting was planned weeks ahead of Tuesday’s announcement from the school that they would move forward with a restructuring plan. But, many say it couldn’t have come at a better time.

The DOJ attorney assigned to the South Bend School Corporation has been working the case for three years. She was in town from D.C. for the first time to hear community feedback.

She heard over a dozen reports from local teachers, students and parents alleging unfair treatment, targeting and neglect of black students.

“I saw all types of things. Neglect and kind of picking on kids at certain times. Teachers being rude and disrespectful,” says former teacher Corey Mcnamee.

The Department of Justice rep was not there to respond, but to listen. She was not able to provide press comment to the allegations.

As Chair of Indivisible District 2’s Equality Committee, Nate Levin-Aspenson was part of planning the forum.

“We’ve heard so many instances of racial bias, in some cases abuse. If you look at the wide view, a pattern that funnels black students from the schools to the streets to the prisons is evident and that’s been really troubling to find out more about,” says Levin- Aspenson.

Mom of four kids in the district, Monique Love says she saw it herself in the way her second grade son was treated.

“I want my kids to be a success just like every other parent,” says Love.

Love knew what to look for. She’s a teacher at another school in the district.

“Everybody’s kid means the world to them. Having that mindset and going to teach everyday it eliminates any room for this damaging error that we have seen, even with my kids,” says Love.

School volunteer Genevieve Trench argues that the teachers are great, but, simply don’t have enough resources to handle their classes.

“They are expected to do too much. As a result we have many problems. We have psychological problems in the schools that teachers are not prepared to deal with,” says Trench.

“I wonder if there really is a will to address the real serious problems with disproportionality as it affects students of color again in terms of graduation rates, suspensions and expulsions,” says Greene.

With big changes announced this week for the district in the form of 'Focus 2018,'  the school’s Director of African American Parent and Student Services was there to listen along with the DOJ.

The “will” that Greene referred to, Boyd says – it’s there.
“Tonight’s meeting was very important. We need to let our parents know that they have a voice. We want our parents to trust us. We will continue to work at mending those relationships we will continue to do what’s necessary for them to know that we are cheering for them and that we will be champions for our children,” says Boyd.

It isn’t clear if the administration is investigating the allegations. But, Boyd acknowledges the inequities the community has experienced. He says he is confident that they will be able to fix things.

He is hoping every parent in the district will fill out a school survey online. FACE (family and community engagement) surveys are available by logging on to your school’s website.