Deployed troops will get packages from military moms and JROTC students 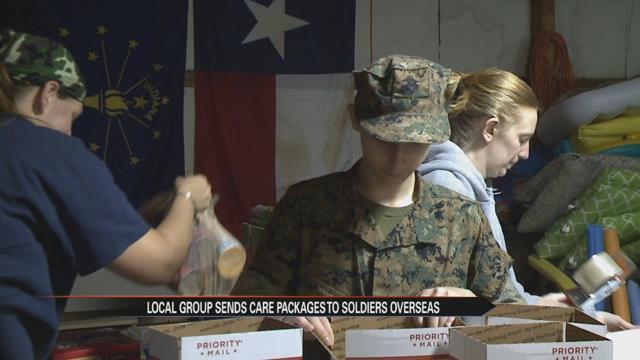 For the 8th year in a row a local group of military moms is sending care packages to deployed troops. This year the St. Joe Valley Blue Star Mothers #6 are supported by more organizations, more volunteers, and more personalized care packages.

Some of the volunteer are students from Riley High School’s  JROTC program and fans of Notre Dame. The students were full of energy and knew this was something that would definitely make a difference.

“My favorite part is seeing that the soldiers get the support that they need,” said Jonathan Meek, the Commanding Officer at the school’s JROTC program. “They’re over there and sometimes they feel all alone and they just need a little taste of home sometimes.”

Meek says helping out here is part of their community service.

“The kids that are joining are getting a lot more engaged in what we’re doing,” said Meek.

Trenton Klassen, a freshman that wants to be a Marine, was the one who introduced this volunteer opportunity.

“It’s a great honor to help out the military and everything that they do,” said Klassen.

Sandra Boldt, President of the St. Joe Valley Blue Star Mothers #6 says by Tuesday the post office will come and pick up the boxes ready to go.

“We have ships we have marines we have army. We’ve got everybody covered,” said Boldt.

Although Boldt doesn’t always know where the packages are going, but sometimes she receives thank you letters.

“They can’t believe someone they don’t know cares about them,” Boldt added.

Boldt’s son was in the army and she says she doesn’t just want to take care of her son. She wants to spread her appreciation for those who stand up for our country.

“All these people these men and women they’re my  sons and daughters and that’s my job as a mother and as American to make sure they’re being taken care of,” said Boldt.

She says the most important thing is to try and send things that remind them of home.

And  ND fans did just that, remind them of home. For the first 3 home games, alumni and friends put together snack packages.

Over 1600 boxes will be sent out to our troops.