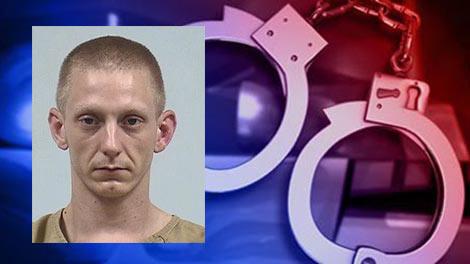 The Elkhart Sheriff’s Department has arrested a man who allegedly struck a patrol vehicle, then ran from the scene on foot.

According to deputies, at approximately 2:29 a.m. on July 25, a deputy attempted to stop a vehicle on a traffic violation near Old US Highway 20 and Jay Dee Street.

The driver, later identified as 30-year-old Scott Young, didn’t stop and a vehicle pursuit led into the city limits of Elkhart, according to deputies.
The deputy ended the pursuit.

While traveling westbound on Bowers Street near Myrtle Street, the deputy’s vehicle was struck by Young’s vehicle, according to the sheriff’s department. Young was driving without headlights and disregarded the stop sign, reports said.

Young fled from deputies on foot, according to the sheriff’s department.

The deputy was treated and released after the accident for head and hand pain.

On July 27 at 3 a.m., Young was arrested on a warrant at a home on Strong Avenue in Elkhart.

Young is being held on a warrant for domestic battery in the presence of a child.

The sheriff’s department is seeking charges for fleeing and resisting law enforcement and for leaving the scene of a personal injury crash.