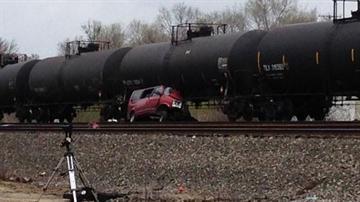 ELKHART COUNTY, Ind. -- A man was killed when his van was struck by a train at the railroad crossing at county roads 13 and 45 in Dunlap.

The victim was identified as 33-year-old Michael McMannis.

According to the Elkhart Sheriff's Department McMannis was on CR13 and was stopped at the crossing. McMannis drove around the crossing gate and began to cross the tracks.

That's when the van was struck by the train.

The van was dragged about 100 yards.

The road was closed for a couple hours during the investigation, but has since reopened.

Mary Beth Haniford was stuck in traffic and had to find another route.

"We are school photographers and we are trying to get to Concord Eastside School, which is on the other side of those tracks," said Haniford. "I have to try to figure out a way to get around to get to that school."

"I'm trying to get to the other side of the tracks, it's about five houses down. I'm working on an apartment that my mom's renting," said Chapp. "I've got to turn around and go down by Meijer and cross."