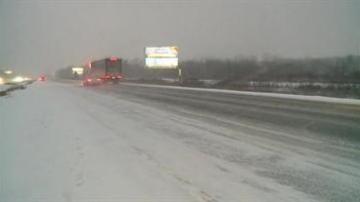 NILES, Mich. -- There were three deadly crashes in Michiana in just a few hours and local law enforcement officers want to warn drivers to be cautious. With more snowfall expected Tuesday evening, the roads will likely be very slick.

"If you feel like you're not capable of driving safely in this weather, have somebody else drive you. Or, staying home isn't always bad either," said Captain Paul Toliver of the Berrien County Sheriff's Department.

He and other officers with the Berrien County Sheriff's Department will be out to help drivers in crashes or slide-offs and to get drunk drivers off the road.

"Accidents happen everywhere. I-94 gets a lot of publicity because of the amount of traffic out there, but we also have a lot of state highways and local roadways where there's going to be a lot of traffic tonight," said Toliver.

They are asking drivers to not only slow down, but to give yourself enough time to stop at intersections.

"We just want a safe and secure holiday season for people. And we're out there doing what we can, we just ask that the motorists do what they can to help themselves and help us out as well," said Toliver.

Because another series of deadly crashes isn't how they want to bring in the new year.

Officers are warning all motorists to drive slowly in the snow, especially on rural roads. They are often the last to be salted and slick spots can form quickly.