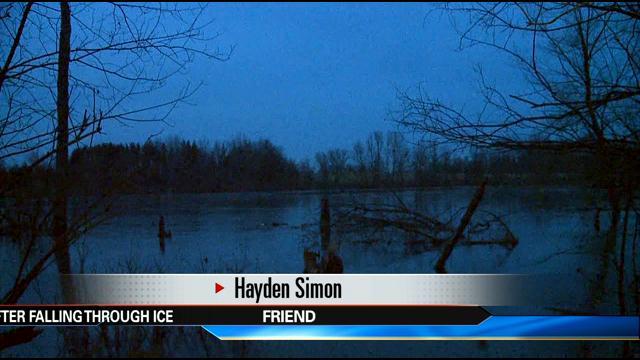 A Berrien County Sheriff's Deputy came to the rescue Friday afternoon after a 13-year old boy fell in a semi-frozen pond in Glendora.

The boy was in the water for nearly fifteen minutes before he was pulled to safety.

Andrew Seils, 13, was taken to Lakeland Hospital for observation after the rescue.

“He was acting like he was getting a drink and got down on his hands and knees and fell head first into the water,” said Hayden Simon.

It was a prank turned cold and ugly in the lake in Berrien County.

“We were right on the edge and he ran to the middle of the ice and he fell in,” said Adam Dempsey.

“Yeah, it's not that thick. It's pretty thick around the edges, but when he went out to the middle. He shouldn't have did that,” said Dempsey.

It is something they know now, that the middle of what looks to be a frozen lake, is off limits.

“Yeah, we don't see ourselves on the ice anymore,” said Cadience Benton.

It is a promise to be safe after they saw their best friend in a scary situation.

“I felt sick to my stomach and felt like I had to just dive in to save him,” said Dempsey.

Dempsey did not have to jump in after his friend, because when deputy Shawn Yech arrived he moved quickly.

"I slid out myself on the ice, probably thirty feet and threw the extension cord out to the kid who wrapped it around him and pulled him up,” said Yech.

He said it is something he has trained for but never been called to do.

Benton said after she saw Deputy Yech go to work, he is the guy to call if this ever happens again.

“I think he is a life-saver and if more stuff happens like this, he needs to be the one that is there to help,” said Benton.

Friends said Seils was in the water for about ten to fifteen minutes and was taken to the hospital as a precaution.
Share this article: