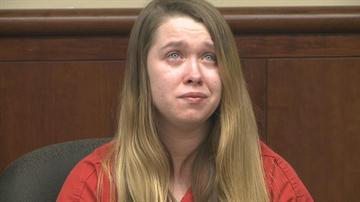 SAINT JOSEPH, Mich. - The Berrien County teenager who shot a man in the face and killed him will be at least 30-years-old by the time she gets out of jail.

A judge sentenced 17-year-old Destiny Coulson to, at least, 14 years in prison for killing her boyfriend last January. Coulson pled guilty to killing 21-year-old D.J. Quinn by shooting him at point blank range in the face with a shotgun.

During Monday’s sentencing Coulson was much more emotional than in past court proceedings. Coulson broke into tears several times prior to the judge’s decision.

Prosecutor Steve Pierangeli began by reading letters from Quinn’s family members. “Part of my heart was ripped frim my chest,” one letter read. At least once Pierangeli became choked up while reading.

Coulson herself read a letter to the judge. “No matter what,” she read. “No matter how many times I’ve cried I can never bring him back to hold him.”

“This has devastated her,” said Coulson’s defense lawyer Lanny Fisher. “She’s as remorseful as any client I’ve ever had.”

Fisher said Coulson has benefitted by the nine months she’s already served in the juvenile system and jail. He said Coulson receives structure in her life that she hadn’t gotten as a child and that the crime she committed is sinking in.

"Nothing is going to bring D.J. back,” Fisher said. “But I think maybe (the Quinn family can) now see how remorseful Destiny really is and maybe that will give them some peace."

Coulson received a minimum of 14 years in prison and was ordered to pay for Quinn’s funeral expenses.