Detour being made to TRANSPO routes due to construction 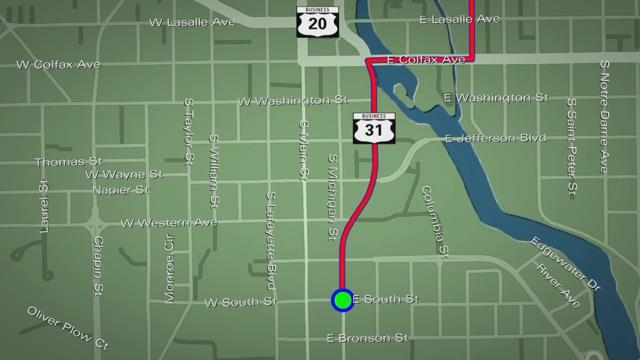 Smarter Streets are on the way to South Bend. The biggest construction phase of the Street Smart initiative began Tuesday morning.

The construction will last through the fall and the goal is to convert Main, Michigan, and St. Joseph streets from one-way to two-way streets.

Traffic throughout downtown will be rerouted during the time of construction. Also impacted will be TRANSPO bus routes.
The routes that will be impacted are 3A, 3B, and 5. For the Route 5 North Michigan Street bus, the outbound route will stay the same up to Colfax Avenue where it will detour to avoid construction areas.

From Colfax the route will go from Niles Avenue left onto Howard Street then to North Shore Drive. The normal route will pick up there.

Inbound buses for route 5 will do the same detour only in reverse. Riders will need to take Howard Street to get back downtown.

People who need to get to the hospital should take the 3A and 3B Portage bus instead of the route 5 bus. The 3A and 3B route buses will turn a block early onto Lafayette and then resume regular route.

This long-term detour plan will be in effect until September 9th. You can see the construction map here.