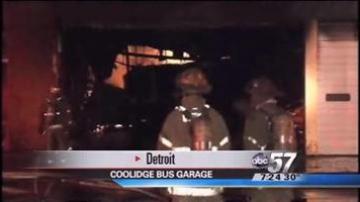 DETROIT, Mich. -- A fire at a state department of transportation bus yard caused more than $2 million in damages in Detroit Wednesday morning.

Six buses were damaged. The fire began a little after 4 a.m. behind the Coolidge Bus Garage, spreading quickly to several other buses and the terminal building.

The terminal's roof was destroyed, no word yet on a cause.