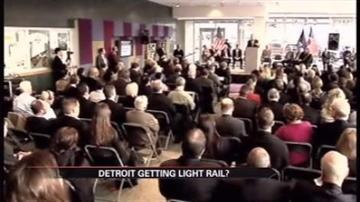 If you've been to Detroit, you know there is no mass transit. Friday, talks about a proposed light rail system is moving full speed ahead.

US Transportation Secretary Ray Lahood announced Friday that the federal government is ready to spend $25-million toward a rail line that would link the city's downtown and the cultural medical and educational center a few miles north.

Part of a deal would create a 3.3-mile street-car line that's expected to cost around $145 million.