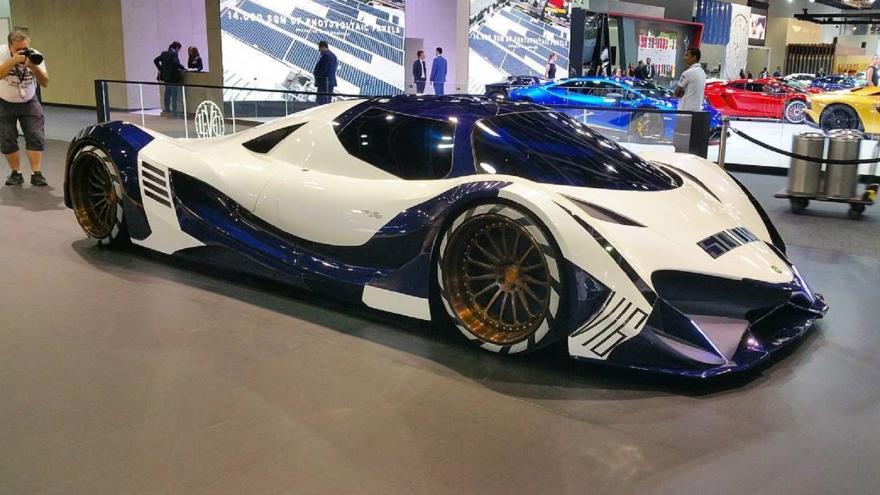 (CNN) -- The era of the 300mph supercar may soon be upon us. Or it might not. It depends if you're on board with astonishing claims of Dubai-based motor company Devel.

After teasing the petrol-head community for years with a concept, Devel launched an updated prototype of Sixteen, its eye-wateringly powerful hypercar, at the Dubai International Motor Show 2017.

Its creators say Sixteen will hit 300mph when it begins testing -- enough to grab the title of world's fastest car and drive off into the horizon with it. If all the bluster turns out to be true, it could represent the kind of leap not seen since the Bugatti Veyron landed in 2005.

Much of the skepticism surrounds the Sixteen's reported 5,000 brake horsepower (bhp) engine. To put it in context, the Koenigsegg Agera RS -- 277.9mph world record holder as of November 2017 -- has a paltry 1,360bhp, while competitor and (unverified) claimant to the 300mph throne, the Hennessey Venom F5, has a 1,600bhp 7.4 liter, twin-turbocharged V8.

But thanks to Devel subcontractor Steve Morris Engines (SME), we have evidence that this hot rod is more than just an exercise in wishful thinking. On November 3, the Michigan-based manufacturer released a video purporting to show the Sixteen's colossal 12.3 liter, V16 quad-turbo engine producing a whopping 5,007bhp on a company dynamometer. How it will function on the track remains to be seen, however.

SME joins Italian motorsports house Manifattura Automobili Torino (MAT) in steering the Sixteen into production. The latter specializes in one-off builds, and is responsible for the Scuderia Cameron Glickenhaus' SCG003S and the Ferrari P4/5 by Pininfaina in recent years. MAT CEO Paolo Garella talks about the Devel potentially surpassing 500kmph (approx. 310mph) in promotional material, and admits with a smile that "we are completely crazy."

Speaking from the Dubai Motor Show, Devel developer Rashid Al-Attari told CNN he expects the car to be completed "in the next 12-18 months," including testing.

There is still a question marks over the tires, he adds, saying that with the correct set the Sixteen "should" cross the 300mph threshold. Street legal tires have yet to be manufactured that can handle such speeds -- for similar reasons, the Bugatti Chiron has not yet reached its potential top speed, rumored to also be in the 300mph region. Al-Attari explains Devel is currently considering two tire manufacturers, but is unable to disclose their names.

On a note that will disappoint only ultra-high net-worth petrolheads, Al-Attari admits that the 5,000bhp Sixteen will not be street legal, describing it as "more of a dragster." However, he revealed Devel is working on two road legal versions of the Sixteen: A V8 with 2,000bhp and a V16 quad-turbo with 3,000bhp. Their projected top speeds are as yet unknown.

Prices for the V8 will start at $1.6m, and the V16, $1.8m, according to the Devel developer, adding that he has no plans to limit the production run of the supercar.

When asked about what he required from his supercar, the wealthy developer told CNN he "wanted the horsepower and a car that is really spacious" -- the latter not normally a hallmark of record-breaking speedsters.

We'll find out whether Devel has delivered on both counts in the near future, if the company's timeline holds true. But we won't find out in Dubai, says Al-Attari. He's set his sights further afield for the launch of the first fully-functional model: "the US, the UK, Germany... it could be anywhere."