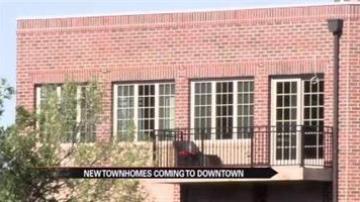 SOUTH BEND, Ind. -- Well, he is at it again. South Bend native and developer David Matthews is getting ready to build another set of townhomes downtown. He is calling them the River Race townhomes.

It is all part of his plan to revitalize downtown South Bend. His first set of townhomes sold out before they were even finished. He is hoping this new set of townhomes will make an even bigger splash.

The majority of business owners in the area could not be happier.

"I think it is very very positive for the downtown area. Right now, I am looking at a gravel parking lot. So if there are some nice condos there it creates jobs, and hopefully they walk across the street and come to the restaurant," said Emporium manager Mike Fox.

But there is some opposition to the townhomes. One business owner I talked with who did not want to go on camera told me he is concerned there will not be enough parking for his customers.

Matthews said no parking is actually a good problem to have.

"When we have more people complaining about parking in South Bend, it means we are finally doing something right. If you look around the area right now the problem is that we have parking lots everywhere," said Matthews.

Matthews admits his townhomes will not be the magic wand that revitalizes all of downtown, but he said it's a start.

And he says there is more to come. "There is plenty of vacant land in South Bend, especially around the river. "

Matthews said he already has his first buyer for the new River Race townhomes. It is former Indiana Governor and South Bend Mayor Joe Kernan.