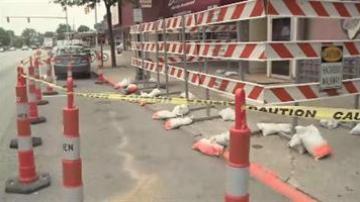 GOSHEN, Ind. -- Walking on Goshen's sidewalks may seem safe enough, but last month the sidewalk gave away on Main Street and a man fell deep into an underground vault.

The owner of the Dew Drop Inn dropped 8-feet underground.

On Thursday, ABC 57 News went down into those vaults to see what inspectors are doing to make sure that residents are safe.

It all started about a month ago on Main Street. The barricades are still up. Now, the city has been going underground to fix the problem, but found out it's only a temporary solution.

"He's tremendously lucky to walk away," said Goshen Chief Fire Inspector Mike Happer. "The edges of the concrete of the hole he fell through were jagged.  So, he cut himself up as he went through and hit the floor."

Happer said it was a freak and frightening accident - one the Goshen Fire Department  doesn't want to see happen again.

ABC 57's Ashley Izbicki went underground to check on the progress on Thursday.

"This was solid cob webs at one time," said Happer.

The area where he fell is now a basement floor, but it used to be the main entrance to downtown store fronts. At one point, the dirty space was used to store coal.

The problem is on the edge where the store fronts end. Happer said back in the 1920s, crews poured concrete over wood and steel frames.

"What you see is these four by fours going in here," said Happer.

Happer said the wood is only a quick fix, not a solid solution.

"We're trying to decide if we're going to put curtain walls up across the front of the stores, and put new sidewalks in and fill up the void. Or they're possibly going to repair the foundations underneath the structure and then fill in the voids and put a new sidewalk on top," said Happer.

Happer said crews only need to shore up two more vaults, but even though the sidewalks are safe, the city needs a plan for all 26 vaults before someone else takes a potentially deadly fall.
Happer said this isn't exactly a rare problem. He said Elkhart went through the same thing. As for how much a permanent fix will cost, he estimates about $250,000.