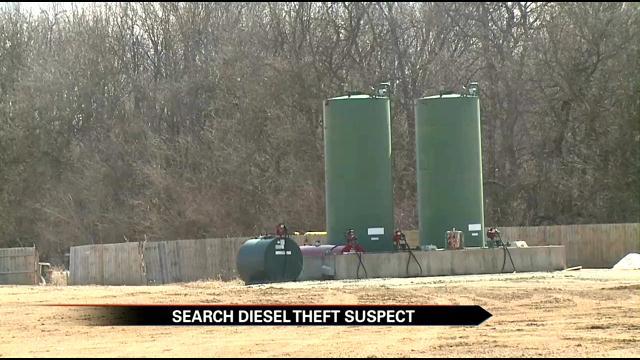 The St. Joseph County Sheriff's Department in Michigan is searching for a suspect who stole fuel from a potato farm, led police on a chase and crashed into a swamp near Sturgis on Sunday.

A St. Joseph County Sheriff's deputy was on patrol on Klinger Lake Road when he saw a red Dodge pickup truck on Black Gold Farm's property around 4 a.m. and two men filling up barrels with diesel fuel.

Deputies attempted to make contact with the two men, but they got into the truck and fled south on Klinger Lake Road. After a short pursuit they crashed in a swamp area of Fawn River Road.

During the crash, the fuel filled drums in the back of the truck fell out and spilled diesel fuel.

The driver ran off, but the passenger was arrested.

Ray Baker, the manager of Black Gold Farms, said, “122 gallons were taken, which is roughly a $500 loss. However there's some vandalism done to the locks, we'll have to replace those.”

Baker said they grow potatoes at the farm that are used to make potato chips.

Baker said, “We've had a number of thefts, both tools and vehicles and fuel also stolen from one of our field locations, all in the past 18 months. So yes it's a little unnerving!”

Neighbors said it appears that the suspect barely missed Aldrich Lake when he crashed.

Jim Wyss said, “I smell diesel fuel, I'm concerned that some of it may get into the lake. I hope they have a remedy for that. It doesn't appear that any is in the lake. But that is swamp land and it would filter out.”

Wyss owns a cottage on the lake just south of Fawn River Road.

Wyss said, “He had to of hit pretty hard because the concrete barrier was uprooted. Along with the steel guard rail.”