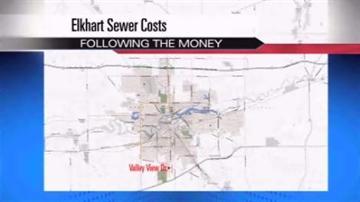 ELKHART, Ind. -- Sewer rates for residents outside Elkhart city limits have been a topic of discussion because the city wants residents and businesses to sign a new compact agreement. While digging into this issue, we discovered three different communities are paying three different rates for the exact same service.

Residents who choose to connect to the city sewer pay an additional flat fee of $24.70 to pay for use and maintenance.

Residents who live on Juno Lake, in Cass County, Michigan, just north of the state line are also connected to Elkhart city sewer.

Each resident there pays a flat fee of $34 a month to use the sewer.

Just south of the Elkhart city limits, residents of the Valley View Drive neighborhood are paying a lot more.

Based on a bill obtained from a Valley View resident, they paid about $80 a month on the old compact agreement.

Because of new federal legislation that's expected to increase city rates by 25-percent, their bills are expected to go up to $100 or more a month.

We reached out to the city engineer. He said all questions about this issue must go through the mayor's office.

So far we haven't gotten a response from the mayor’s office.