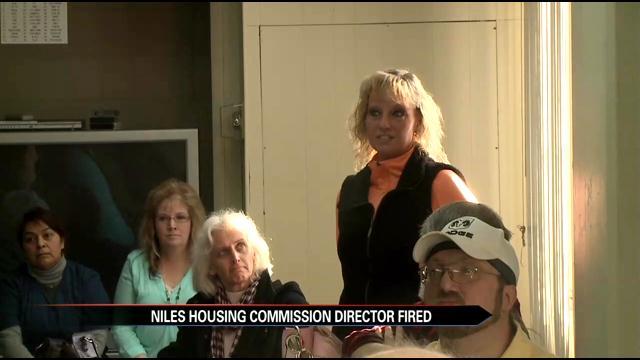 The Executive Director of the Niles Housing Commission was fired on Wednesday morning at a special meeting.

At the meeting, residents gave former Executive Director Shelly Casey a standing ovation. One lady was screaming and crying when commissioners voted to terminate Casey's employment.

Helen Benjamin said, “You don't know what our feelings are! You guys just sit there and put out what you guys feel! You don't put out what we feel in here!”

Benjamin and her service dog Rosie have lived at the Gateway Complex in Niles for several years.

The housing commission in Niles receives over $275,000 from the Department of Housing and Urban Development. Recently HUD listed the Niles Housing Commission in a "troubled" status and commissioners were asked to sign a recovery agreement and bring in a new property management team.

Apparently the board fired their first management group which violated the HUD agreement, and HUD gave them a notice to find a new one.

After the meeting, the housing commissioners said they had no comment on Casey's termination.

Casey was visibly emotional and handed out "guardian angels" and notes to the residents she is leaving behind. Casey said she plans on moving to Tennessee to be closer to her children.

Casey said, “I have a daughter who's in college. A son who is getting ready to graduate this year, and I am a single mom just trying to make ends meet.”

Casey believes she helped to bring the Niles Housing Commission into good standing so she's not sure why she was terminated.

Casey said, “When I came in there were over 17 vacancies and that was March 31st, we closed out... at 100% occupied and we've maintained that every month since!”

Apparently that wasn't enough for commissioners. Jane Lano said she resigned as a housing commissioner in January because she didn't agree with HUD's recovery agreement.

Lano was at the meeting on Monday to support Casey.

Lano said, “It's the wasteful squandering of the money! It just really irritates me. So what I saw happen when HUD mandated that Premiere Housing Management Company was hired last year, it was an incredible amount of wasted money."

A HUD director out of the Detroit field office released this statement to ABC57 regarding the situation: