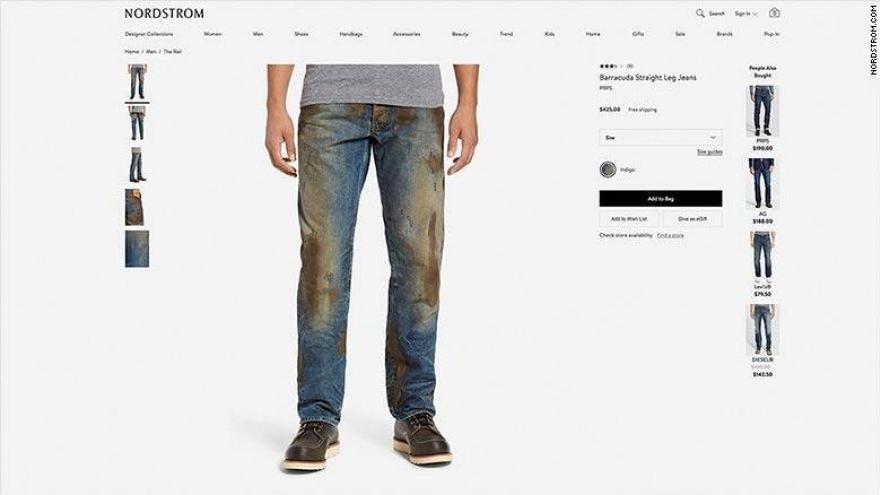 NEW YORK (CNNMoney) -- Dirty denim is the new black, selling for hundreds of dollars at pricey retailers like Nordstrom.

Nordstrom is offering \"heavily distressed,\" muddy jeans for $425 on its web site.

Nordstrom says that the jeans \"embody rugged, Americana workwear that's seen some hard-working action with a crackled, caked-on muddy coating that shows you're not afraid to get down and dirty.\"

The mud has a shiny sheen to it, as if the jeans were dragged down a filthy hill and left in a wet ditch.

The filthy fashion statement isn't actually new -- the jeans have been for sale at Nordstrom as well as at Neiman Marcus and Saks Fifth Avenue for quite some time. But for some reason, the listing on Nordstrom's website caught the internet's attention on Tuesday and the inevitable Twitter firestorm ensued.

The jeans are made by the fashion company PRPS, which also offers a \"mud denim jacket\" for deep-pocketed fashionistas who want to rock the all-denim, all-dirt look. The company also makes paint-splattered, pre-ripped dungarees, including one pair it calls simply, \"Destroyed.\"

Despite the prefab dirt, the jeans can apparently be washed, at least according to the care instructions, which recommend machine washing cold and line dry. According to someone who answered the phone at PRPS customer service, the dirt does not wash out, because it's actually not real dirt.

\"This is a joke, right?\" commented a skeptical shopper on the Nordstrom web site. \"Do you also sell jeans covered in cow manure?\"