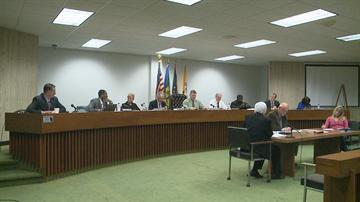 SOUTH BEND, Ind. – A proposal to amend South Bend’s human rights ordinance to include protection against discrimination based on sexual orientation and gender identity went before the Common Council on Monday night.

Currently the South Bend Human Rights Ordinance grants equal access to things like education, employment and housing and is written to prevent discrimination based on race, sex, religion, disability or national origin.

Similar proposals to add sexual orientation and gender identity to the ordinance were rejected by the council in 2006 and 2010.

At Monday night’s meeting the bill received its first reading and was assigned to a committee for review.  But, that usually straight-forward process was interrupted by debate among council members at a committee meeting before the council meeting.

Council Member Karen White chairs the Personnel and Finance Committee, which has been tasked with reviewing the bill.  Other council members reportedly objected to her chairing the committee which would review the bill because of alleged bias due to White’s personal views about the issue.

“They didn’t want her to chair the committee and didn’t want it in that committee which is unconscionable,” explained Council President Derek Dieter.  “We want to give everybody the chance to speak, this is about freedom of speech, I found it not very good that people would think that ‘church people’ can’t come and speak on this issue one way or the other.”

Dieter claimed multiple council members complained about White being chair of the committee to review the proposal.  But, Council Member Valerie Schey said the objections were “misunderstood” and council members were just hoping to have the review of the bill carried out in joint committee meetings with other committees affected by the changes in the rights ordinance.  Still, Schey said council members should consider how their personal views affect their handling of the controversial bill.

“There’s a difference between the public coming and sharing their views and the role of elected officials using religion in their decision making process,” Schey explained.

The debate amongst council members could be a sign of things to come.  Though the public was not allowed to comment on the proposed change to the rights ordinance, several people attended the meeting to show either their support or opposition to the proposal.

“It’s not going to harm any other people, it’s simply going to help a group of people who have been facing discrimination,” explained Catherine Pittman, a spokesperson for South Bend Equality.

But, those opposed to the proposal claim it will have long-lasting and negative effects.

“These types of laws are ruled by either the courts or the legislatures as a basis for homosexual marriage which is a red-line for a lot of people,” described Tom Uebbing, who opposed the proposal.

At Monday night’s meeting the council set March 26 as the date for public debate and voting on the bill.