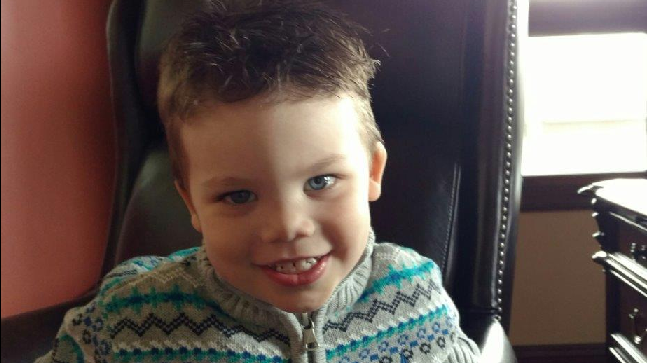 LAKE BUENA VISTA, Florida (CNN) -- The 2-year-old boy who witnesses said was pulled by an alligator into a lagoon near a Walt Disney World hotel has been found dead by the Orange County dive team, Sheriff Jerry Demings said at a Wednesday news conference.

The body of the boy, Lane Graves, was found intact about 1:45 p.m., not far from where the boy was grabbed Tuesday night, Demings said. His body had only a few puncture wounds, according to a source familiar with the investigation.

"Of course, the autopsy has to confirm that, but there is likely no question in my mind that the child was drowned by the alligator," Demings said.

Demings said the body was found in 6 feet of murky water perhaps 10 to 15 yards from where the boy was attacked.

The boy's parents, who are from Elkhorn, Nebraska, were identified as Matt and Melissa Graves.

Demings said the Graves were distraught yet relieved that this was not a protracted search.

He said he brought a priest with him when breaking the news to the parents, who are Catholic.

Florida Fish and Wildlife Conservation Commission Executive Director Nick Wiley said the alligator may have already been caught, but that has not yet been confirmed.

"We're going to make certain that we have the alligator that was involved, and that we remove it from the lake," he said.

Forensics teams will try to determine whether one of the alligators already taken from the lake is the one that dragged off the boy. If not, the search for alligators in the lake will continue.

The boy's family was at a movie night outdoors at the Grand Floridian resort when around 9 p.m. the boy waded into about a foot of water in a lagoon, authorities have said. Witnesses, including the boy's horrified parents, tried to save him. His father jumped in and tried to pry the gator's mouth open. His mother jumped in, too.

But it was too late. The child was dragged underwater in the Seven Seas Lagoon, witnesses told authorities. The lagoon is connected to a series of canals that feed into large bodies of water, Wiley said earlier.

The Reedy Creek emergency services call center first received a report about the attack at 9:16 p.m.

A search began for the boy immediately, with boats from Disney searching along with law enforcement.

Wiley said the child was on the edge of the lagoon when the alligator attacked, according to the boy's family. He cautioned that the investigation is still in an early stage and officials need to interview at least two other families who may have witnessed the attack.

Demings specifically said the child was "wading ... along the lake's edge at the time that the alligator attacked."

Parents rush into water to save son

The father suffered minor scratches on his hand trying to save his son.

Demings said there is no record of similar incidents in the area.

A handful of people witnessed the attack and supplied police with information. Witnesses said the family was on the beach, and the boy's sister was in a playpen about 20 to 30 yards from the water, according to Demings. The toddler was nearby, wading in the water.

There are "No Swimming" signs at the lagoon, and no one but the child was in the water at the time of the attack, Demings said.

Declan Salcido, who was vacationing at the resort with relatives from San Jose, California, said the "No Swimming" signs are visible "from any vantage point."

The lagoon is not for recreational swimming.

"This is Florida, and it's not uncommon for alligators to be in bodies of water," Demings said.

A sign at a pond at the nearby Shades of Green resort says: "Florida is a natural wildlife habitat. Do not feed or go near the alligators."

Many on social media lambasted the child's parents, while others urged compassion.

Some people said a "No Swimming" sign is hardly sufficient if alligators could be lurking.

Robert Vachon, who was at Disney on his honeymoon with his wife, Brianna Vachon, said from the window of the monorail the lagoon beach looked like it was in a dangerous area.

"I was wondering why it's not fenced off," Bachon said.

"Everyone here at the Walt Disney Resort is devastated by this tragic accident," said Jacquee Wahler, a vice president at Walt Disney World Resort. "Our thoughts are with the family. We are helping the family and doing everything we can to assist law enforcement."

Demings said no reports of nuisance alligators have come in the region recently. The alligator is between 4 and 7 feet long, Demings said.

Jeff Corwin, a noted national animal expert, said he was surprised this happened so close to a highly regulated area. Disney has many thousand acres. An alligator could make its way, undetected through some swamp and marsh into a lagoon near where people congregate.

When a gator bites down, his jaws snap closed with thousands of pounds of force, Corwin said. "I can't imagine the terror on these people's minds trying to manage this," he said.

Dino Ferri, director of the Central Florida Zoo, said a child would be a more enticing target than an adult, because of the grown-up's size. Alligators hunt food from just before sundown to sunrise, so they are very active around dusk.

As of April, only one other major alligator attack has been reported this year, according to Florida Fish and Wildlife Conservation Commission. That person survived the attack, but required medical care.

In 2015, there were nine major unprovoked attacks with one fatality.

The park has a full-time team that monitors the complex, and if they spot a potentially threatening animal they call the Florida Fish and Wildlife Conservation Commission, which then responds.

"The story here is this is a tragedy and terrible, but it's a rare occurrence," Wiley said. "And fortunately it doesn't happen that often and we are doing everything we can to make sure it doesn't ever happen again."

Demings said it is rare to see alligators at the lagoon. He was asked by CNN's Erin Burnett if there should be alligator warning signs at the beach.

"In every tragedy there's an opportunity to learn from it and to make modifications," he said.

More than a million gators

There are an estimated 1.3 million alligators in Florida, said Arnold Brunell, a wildlife biologist and researcher for the Florida Fish and Wildlife Conservation Commission. That number has been holding steady for the past five years, he said.

According to the wildlife commission's website, at least 23 people have been killed by Florida alligators since 1973. That includes three children younger than 10. One was a 4-year-old girl who in 1988 was killed while walking along the edge of a lake in Charlotte County.

It has been a tragic week for the Orlando area. A gunman massacred 49 people early Sunday at an Orlando gay club in the deadliest mass shooting in U.S. history.

A day before the rampage, a man shot singer Christina Grimmie as she was signing autographs following a concert.