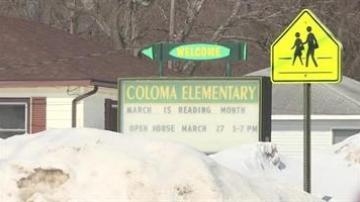 COLOMA, Mich. -- The Michigan Department of Education has invalidated all the 3rd and 4th grade MEAP test scores for students at Coloma Elementary School in reading, math and writing. The state found the school improperly administered the state assessment test.

Joy Dillard-Davis has a son in fourth grade at Coloma Elementary who is a straight-A student.

She says her son takes testing seriously and is angry school administrators didn't do the same thing.

"I don't know what to say it's just furious that they would just lift the rug up and brush it underneath there and try to hope that it goes away," said Dillard-Davis.

According to the Michigan Department of Education report, Coloma Elementary MEAP test administrators allowed third and fourth graders to go back later and fill in answers to questions they had left blank.

The report's findings state the elementary principal obtained a fifth grade MEAP science test from another school district after two Coloma school employees refused to do it.

"She was told twice from employees of Coloma that she could not have a copy of that test and then she went to another school district and she did get a copy of the test. I think that's insubordination and she should lose her job," said Dillard-Davis.

With invalid test scores on the district's record, it could affect how Coloma schools rank among other schools in Michigan.

"When you have invalidated test scores, that's not going to help any school along those lines so that would be one possible impact that the school is either added to that list or is kept there longer," said Bill Disessa with the Michigan Department of Education.

The report requires teachers and school administrators to be retrained in testing procedures,

"I would hope that they would hold somebody accountable and responsible for what had happened," said Dillard-Davis.

Superintendent Terry Boguth says there is no evidence tests were ever readministered.

She said it was wrong for the principal to show a test booklet to other teachers, but says she was only trying to show the density of the text.

Boguth says the district is appealing the state's findings.

Click here to read Boguth's statement regarding the state's findings.