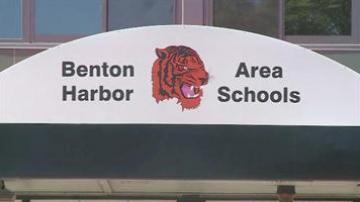 BENTON HARBOR, Mich. -- A board appointed by Governor Rick Snyder examined Benton Harbor Schools' budget and determined it will go under financially if the state doesn't step in. The governor declared a financial emergency. What does that mean for students who return to school soon?

With the state stepping in before the first day of classes, all the schools will open. Students and parents should not notice a difference, according to Berrien County Treasurer Bret Witkowski.

"Come the first day it will be business as usual. It will be things that people don't see that will be different, and that will be the relationship between the state and the school system," said Witkowski.

Witkowski sits on the review committee that has been examining the district's budget.

The district is in deep debt.

"Benton Harbor really got themselves into a financial situation between 2006 and 2010 where they accumulated over $14 million of debt," said Witkowski.

Witkowski says the biggest issue is the sudden drop in student enrollment.

Schools get money from the state per student.

"I hate to say that but that's just the way it's set up in Michigan. Each student brings in about $7,000. A little bit more than that I think," said Witkowski.

Witkowski says the district has lost hundreds of thousands of dollars, but still has bills to pay. That's the problem.

"They need to look at a lot of things, their athletic conference, they've got land way up by LMC college that they bought years ago for a new high school. They need to look at selling that property because that's not in the cards. All those things are on the table now," said Witkowski.

Witkowski says the board and the governor are working on a fast track. Major decisions have to be made by the start of this school year.