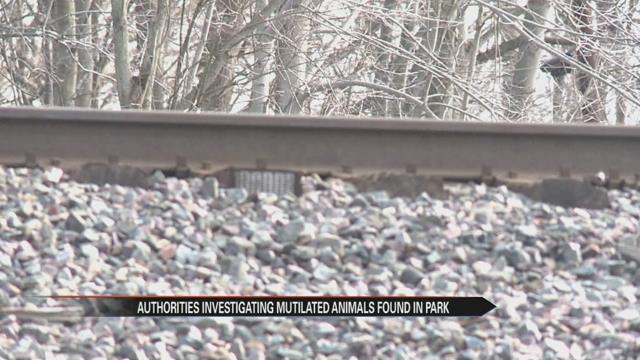 The Sheriff’s Office says someone was walking down a trail at the park and came up here near the rail road tracks to a disgusting scene off South Holmesville Road.

Five opossums, two raccoons, a deer, and another unknown animal were all found near the rail road tracks in horrific conditions.

Visuals are not available but Captain Kellems described it in detail.

“Yea heads removed, and it’s hard to tell exactly what because they were in various stages of decomposition,” says Kellems.

The case has been handed over to the Department of Natural Resources who says if they find a person was responsible for harming the wildlife they could face up to one year in jail and up to $5,000.

“It could be done for any variety of reasons but it’s a strong indicator that somebody has some anger or some issues,” says Captain Kellems.

The animals were not placed on the train tracks and their heads are still missing.

The County Park Department says there are not surveillance cameras to help with the investigation, but with several hundred people visiting the park each month, they along with the County Sheriff’s Office hope someone can help.

“One of the things that is of concern to us is that when you mutilate an animal it’s obviously some type of strange behavior,” says Captain Kellems.

If you have seen any suspicious activity in the past month near Red Mill Park in La Porte, contact the Sheriff's Office Detective Bureau.