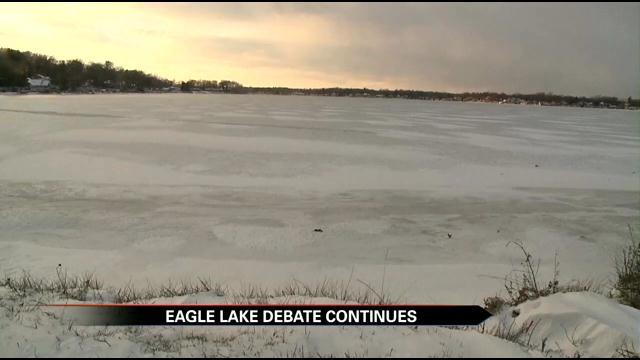 Eagle Lake residents might soon see a boat ramp and public park pop up in their community.

It's a controversy we first told you about this summer after the first proposal was shot down by Ontwa Township, and a lawsuit ensued between the Eagle Lake Improvement Association and Michigan's Department of Natural Resources.

In June the DNR officially purchased a smaller parcel of land for $450,000 after the original plan fell through.

This November, Judge Dobrich in Cass County Circuit Court ruled that the Ontwa Township Zoning Board of Appeals had the right to define the definition of a park. Carl Higley Senior was a Cass County Commissioner for 40 years, and he said the public's access to Eagle Lake has been a problem for a long time.

Higley said, "We want the public to have it. Not just a handful of people who want to control everything... In the years past people on Eagle Lake at one time put a barbed wire fence across the beach so they couldn't swim in it!”

Higley believes the public access ramp would boost the economy so he supports the DNR's next plan, and he hopes the zoning commission will too.

Higley said, "When people come in from Indiana and all over to go fishing then they'll have a place to do business here in our area to help build the area, that's what we're looking for, create jobs for us, create businesses, and allow Edwardsburg to grow.”

Those who live on the lake feel differently. They think a public park on Eagle Lake Road will jeopardize the public's safety.

Barb Whalen said, “The lake residents have been fighting this for a while now. Mainly because there's a curve there and it's an accident waiting to happen!”

Whalen said this lake was not meant for high volumes of tourism, and she's worried about the lake becoming contaminated by weeds and other things the boaters might bring.

Whalen said, “People will be parking across the street, darting across, then cars with boats and trailers will have to back up in order to get to the ramp and that's just very dangerous.”

The DNR still has several hurdles to jump over before the boat ramp is put in. Their next step is submitting a new plan to the Ontwa Township Planning Commission and they will have an opportunity to reject the proposal.
Share this article: