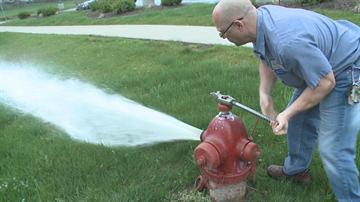 The Cassopolis Volunteer Fire Department claims about 20 fire hydrants don’t work in town but the Village of Cassopolis disagrees.

Ash certainly doesn’t think the kids inside the school are safe. “If something happened how quickly could the fire department do something about it?” she said.

Of the 160, the department found about 20 that couldn’t be opened or didn’t have enough pressure to fight a fire. The department put black bags around all 20.

The Village of Cassopolis had a different story when ABC 57 News asked about the hydrants. “They can open them,” said Ronald Bass with the Cassopolis Department of Public Works. “When we leave here I’ll show you.”

Bass said some hydrants are tighter than others. “Every hydrant in the Village of Cassopolis works.” He said if fire fighters used an extension to their wrench the hydrants would open.

The village went one step further, telling firefighters they cannot test the hydrants.

The village sent a letter to the fire department on March 7th telling them: “No one other than DPW and the Cassopolis Police Department are allowed to take a hydrant out of service or black bag it.”

Locke said it was a safety concern. He wants the department to know which hydrants work and which do not.

“The fire department should be the one to know its working because they need to hook up to it,” said Ash.