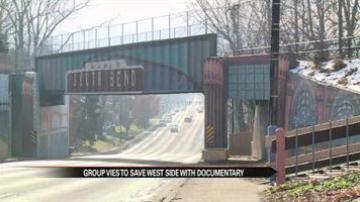 SOUTH BEND, Ind. -- South Bend's west side is the focus of a new documentary. The filmmaker hopes to expose the issues and highlight the positives. The money raised will go towards putting park benches in local parks.

Filmmaker Cody Clemons says at first his goal was just to showcase the positive things about the west side, but by the time he was done filming, his documentary had a new purpose.

"We want to increase respect, admiration. We want people to look at the west side and think wow! That's our west side," said Clemons.

Clemons says one of the first things he noticed about South Bend is that there's a divide between the west side and the rest of the city.

"I heard a bunch of stereotypes and just some negative things about the west side, and whenever we moved here, it has been a completely different experience," said Clemons.

He and about 20 other people worked tirelessly on this documentary in hopes of changing minds, and bridging gaps.

"A sense of unity in South Bend. We're all in this together. It doesn't matter what side of town you're from or where you live," said Clemons.

Clemons says all of the money raised from the documentary will go to parks on the west side.

He says the first project is to put benches in the parks.

"In talking with some neighborhood leaders I found out that local parks are really a focal point for communities. In this case, there's playground equipment but there are no park benches for the parents," said Clemons.

Clemons says it's no secret the west side has a lot of needs. He's hoping this is just the beginning.