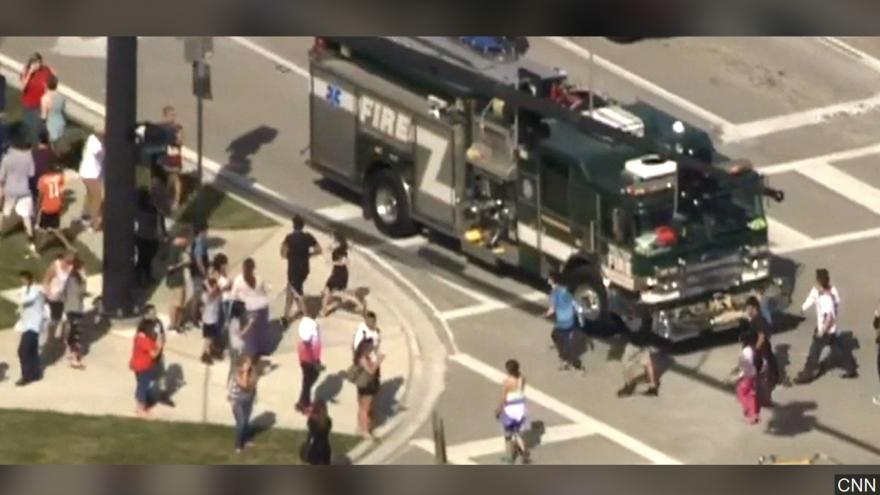 (CNN) -- As a gunman killed petrified students and staff members at Marjory Stoneman Douglas High School last month, officers outside could not immediately work together to locate the gunfire or the shooter.

Dozens of calls poured in amid confusion and miscommunication.

When officers from two agencies arrived to the scene, their radios didn't work correctly. The 911 lines were "blowing up" and dispatchers could hear gunshots in the background as officers tried to pin down the shooting location.

The release of a more detailed timeline of law enforcement operations comes days after Florida Gov. Rick Scott ordered an investigation into the response to the deadly shooting at the Parkland school.

School resource officer Scot Peterson, who officials say waited outside the school building as the shooting unfolded, initially oversaw his colleagues' response to the shooting.

In the first 10 minutes after gunfire erupted, Peterson ordered officers to shut down the street intersection in front of the school, began a lockdown and alerted officers of the location of possible gunfire.

"For the initial stages of the event, Peterson is the eyes on the ground so it's appropriate for him to relay that information and direct responding personnel," Col. Jack Dale told CNN.

He may have slowed down the response by ordering officers to stay at least 500 feet away from the building, according to the audio recordings.

The agency's active shooter policy calls for deputies to interrupt the shooting and search for victims when there's a ceasefire.

Broward County Sheriff Scott Israel had said Peterson should have gone inside the building and killed the gunman.

Peterson's attorney has said he did not enter the school because he believed the shooting was coming from outside the school buildings.

"I know there is a lot going on. Do we have a perimeter set up right now and everybody cleared out of school?" Jordan asked on the police radio.

"That's a negative," a dispatcher replied.

As dozens of law enforcement officers descended onto the high school, some could not communicate amongst each other.

Attempts to merge radio traffic from the Broward County Sheriff's Office and the Coral Springs Police Department into a common radio channel failed.

They could not exchange descriptions of the shooter and the weapon he was using. At some point, they could not transmit or receive any messages either.

That police officer was transmitting the description of the alleged shooter Nikolas Cruz while sheriff deputies were asking colleagues to spread any information about the shooter.

"We don't know, but we're heading in the building, in front of the 13 building, building 13," a deputy responded to an inquiry.

The radio traffic was so high that it overwhelmed the system, which is "nearing its end of life" and is expected to be replaced in 2019, the sheriff's office said in a statement.