Does a PI have an eye on you this Valentine's Day? 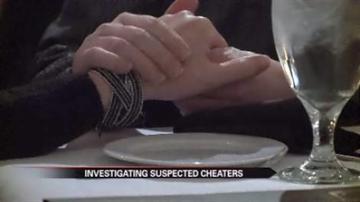 SOUTH BEND, Ind. -- It is not just restaurants and flowers shops that are busy this Valentine's Day.

ABC 57 sat down with a private investigator who has several investigators on the streets right now, working overtime to catch cheaters.

The private eye I talked to has been doing this sort work for 15 years now and she says Valentine's Day is one of her busiest every year.

However, because of the sensitive nature of this job, we are keeping her identity hidden.

Valentine's Day is not just about flowers and chocolates. For some, it is about heart break, deceit and suspicions. That is where private eyes come in.

"We have already gotten phone calls today about spouses that are suspicious about there significant other. That there may be something else going on this evening or this weekend."

This PI from Integrity Investigations Inc. says she has several investigators on the streets right now, tracking suspected cheaters flagged as suspicious by their significant other.

"Normally when they call they know it has been going on for quite some time. They've had that sick feeling in there stomach, they something is wrong."

But if you are not ready to hire a PI, she says there are some tell-tale signs someone is cheating.

Other signs? Your mail is not coming to your house anymore, your significant other is working odd hours and has to travel more for work.

However, she says on Valentine's Day cheaters will try to fool their spouse by being overly attentive.

"A lot of times we'll see that today on valentine's day the individual, if there is infidelity going on, the individual will be with their spouse. But then this weekend, they will normally getaway with their girlfriend or boyfriend."

But eventually, she says, every cheater gets caught.

"It really depends on the person that we are watching, but normally if there is something going on, we are going to find out."

Hiring a PI can be very costly, but the investigator we talked to says it is worth it if it gives you peace of mind on the most romantic holiday of the year.