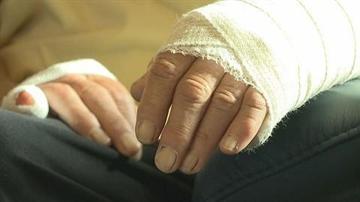 BUCHANAN, Mi. – City commissioners, mulling over a decision whether or not to create a new city ordinance, heard from Berrien County Animal Control and the public Monday night at a public meeting.

The ordinance would try to protect residents inside city limits from being viciously attacked by animals like Ann Desenberg and her brother Louis were just a few weeks ago.

It was about 3:00 on a Saturday afternoon when Ann Desenberg was on her hands and knees deadheading some of her Siberian Iris’. She was nearly finished when she suddenly heard a growl from behind her.

Looking back, she saw two pitbulls nearby. Ann says, she slowly stood up and started to side step her way towards her home. It was nearly 60 feet from where she was to her garage.

The process was slow going, and she says she maintained eye contact with the dogs as she backed toward her home. Then, just before she was able to get inside her garage the larger of the two dogs decided the 70-year-old woman had gone far enough.

The dog leapt at her knocking her down and within moments the dogs were mauling her. She remembers what she was thinking as the dogs attacked. “I’m going to die,” said Desenberg.

Three hundred feet away, Ann’s brother Louis Desenberg had just walked out of his home. He saw the dogs backing his sister down her driveway and had enough time to hope she could either escape or convince them not to attack. As the dog’s assault began, Louis began running across the yard to help.

In just a few moments the dogs had brutally assaulted Ann, crushing her wrist, breaking some bones in her arm, and nearly tearing the pinky of her right hand completely off. I’d inch in a little bit and they’d yank me out again. They were very strong dogs,” said Ann.

Ann knew if she didn’t do something, she was not going to walk away from the attack. “I didn’t have time to be scared, I was fighting,” said Ann. But none of her tools were within reach; she was helpless. That is when she saw Louis running toward her. “He had a red shirt on. I thought, thank God,” said Ann.

By the time Louis got to the garage, Ann was on the ground and the dogs were all over her. He quickly grabbed a 2x4 and tried to get the dogs off of her. He was successful, but now they had a new target for their aggression. “One of them grabbed onto the 2x4 and the other dog was coming at me,” said Louis.

Louis kept the dogs attention long enough for his sister to escape into the cab of a pickup truck in the garage. He says, he too did not have time to be frightened and was to busy trying to keep the dogs off of him.

Eventually he also escaped into the bed of a second pick up. It was there he saw how badly the dogs had injured him during the rescue. His left leg was a bloody mess, his calf shredded part of the muscle torn out.

From the bed of the truck he was able to get the dogs out of the garage long enough for them to close the electronic door. After police arrived the two dogs were taken into custody and the two wounded humans were taken to the hospital.

It would take nearly 12 hours for Ann to be patched up after the attack. Hospital employees lost track of how many stitches they used to close her wounds. One employee stayed late for two hours taking care of her injuries. She says he has a special place on her list of favorite people.

Depending on surgeries it could take up to eight months for Ann’s leg to recover. Her wrist and left arm may never be the same, and she is likely to lose mobility in it. If the skin graft on her pinky does not take, she could still lose it as well.

Now, with the loss of mobility she fears she may have to give it up. But it is the emotional and psychological trauma that is preventing her from enjoying her passion even at home. “I don’t think I’m ever going to work on my backyard again by myself,” said Ann.

Val Grimes, Director of the Berrien County Animal Control, says the attacks make her sick. “These dogs were totally out of control. You have to look at the breed, as much as I am not a breed specific person, I think pitbulls often times get a bad rep. However, they earn a lot of what they get,” said Grimes.

Aggressive dogs of all species are a problem nationwide, not just in Berrien County according to Grimes. Municipalities like Buchanan are trying to figure out how to deal with them. Some have gone to the extreme of banning certain breeds.

At the beginning of the public meeting Monday night, the Buchanan city commissioners stated they are not looking to do that. They were interested in the public’s ideas for solving this problem so it doesn’t happen again.

Many ideas were suggested including increasing fines for unregistered dogs and tightening up local enforcement of a new leash ordinance recently passed in the city. Another suggestion was to require pet owners to have some form of insurance to cover damages should the animal injure someone.

One of the people supporting the insurance requirement was Louis Desenberg. It was mentioned that the owner of the dogs that attacked Louis and Ann, did not have the financial capability of covering the damage the dogs did, nor did she have any kind of homeowners insurance.

The idea that the victims have been left holding the bag on doctor’s bills is not something Louis and several others are pleased about. “People that want those animals, [it’s] a privilege they ought to pay for it. Because, it shouldn’t be my burden; it shouldn’t be Ann’s burden; to suffer the consequences of somebody else’s pet,” said Louis.

Grimes agrees with the idea of requiring insurance, but she adds a caveat. “You really have to look at where you’re going with this and take a good hard look at it before you make those kinds of rules,” said Grimes.

A representative from the Berrien County Commissioners was present at the meeting and weighed in on the prospect of adding such a requirement. He warned that it may cause more problems than it solves.

From his perspective, current licensing fees help monitor and control the population of animals in the county and keep them up to date on their immunization shots for diseases like rabies; adding an insurance requirement may be too much for pet owners to swallow and some people could simply stop licensing their pet.

No matter what the city commissioners decide, there seems to be a consensus that writing a new ordinance will not stop all future attacks from happening, but it could limit them. For now, they plan to take Monday night’s public input and the information supplied by Grimes into a work session and figure out what to do next.

As for the dogs that attacked Ann and her brother; they have been euthanized.