Dog helps save 4 children from fire 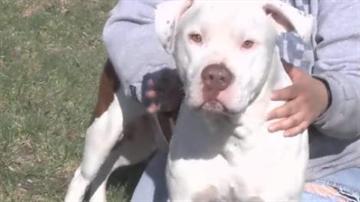 NILES, Mich.  -- A next door neighbor's dog is credited with helping save four children from a burning home. It happened in Niles early Saturday morning.

In the middle of the night, Meagan Shell and her husband suddenly awoke to their dog Hector and his relentless barking.

"When he started barking at first, that's when we knew something was going on. That something was wrong because he never barks in the middle of the night," says Shell.

She was right. When Shell walked outside to see what was going on, Hector immediately ran to her next door neighbor's house.

"All of a sudden we came around the corner and we saw smoke coming from the house next door," said Shell.

That is when Shell jumped into action and called 911. Moments later, she saw four kids rushing out of the house.

As soon as Hector saw the kids, he stopped barking.

"I tell them to grab onto Hector's collar and not to let go."

Then Hector did something that surprised everyone. When Shell told him to go home, he immediately led all four children to the safety of her house as they clung to his collar.

"I have never seen him react like that. He was on a mission, he wasn't trying to hurt anybody, he was trying to help."

Shell says it was Hector's barking that woke her neighbors up and alerted them to the fire. She says there is no doubt the fire would have been much worse had it not been for Hector.

"He is a really good dog for doing that and now I know that no matter what he will always keep us safe."

A spark in the home's fuse box is suspected of causing the fire.