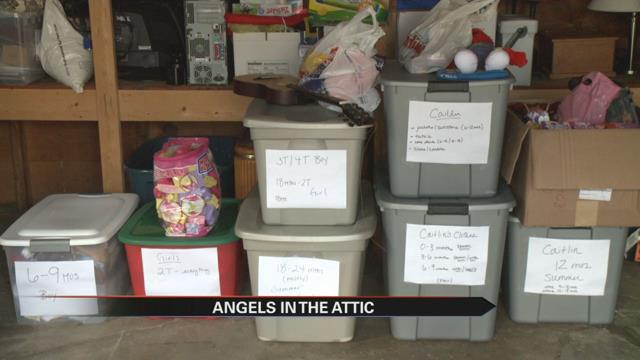 A local charity is working to provide hope for survivors of domestic violence.

Kristine Kuroski is the founder of the charity Angels in the Attic which provides necessities for women and children who leave abusive situations.

“I’m a survivor of domestic violence myself and it really helps to understand where they’re at because I’ve been there,” said Kuroski.

Kuroski endured almost a decade of physical and emotional abuse at the hands of her ex-boyfriend.

“I’ve been attacked on the women’s shelters property with my baby in my hand from my abuser,” said Kuroski.

But like many victims of domestic violence, Kuroski went back to her abuser multiple times.

“Sometimes I think the fear of the unknown is scarier than the fear of staying,” said Kuroski.

Kuroski’s biggest fear was how to provide for her children on her own.

“When you leave that situation and you can’t leave with much, how do you get back all those things?”

It was a fear Kuroski overcame with the support of others.

Once Kuroski experienced the struggles of starting over she wanted to be the support for others in similar situations.

“Everything that I’ve gone through has been such a powerful instrument for me to reach so many people who may not have heard the message because they didn’t believe that someone had really walked in their shoes. But I’ve been there,” said Kuroski.

Four years ago Kuroski founded Angels in the Attic.

“There is a void in our community where we can take resources and allow them to get funneled to those who truly need them and deserve them and help them get back on their feet,” said Kuroski.

She provides victims with necessities such as clothes, dishes and furniture so they can leave abusive situations without fearing the financial burden of independence.

“To watch the community step up when I put out a request on Facebook or I network through a group of ladies that work with me, and we find a bed.  And next thing you know, we find a bed, and dishes, and toys, and clothes.  They are starting to see living on their own as a real possibility.”

This holiday season Angels in the Attic plans to provide gifts for 107 kids – all children of domestic violence survivors the charity has helped over the past year.