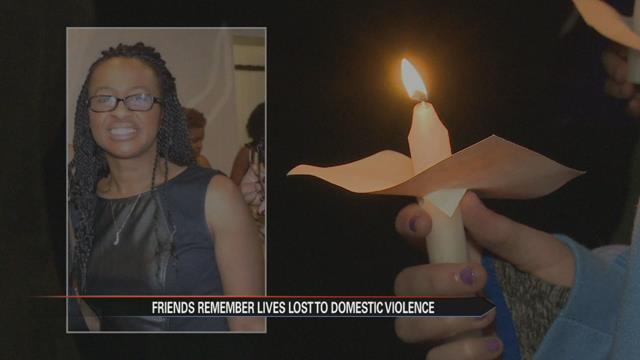 The South Bend community came together Thursday night to remember a mother lost to domestic violence.

Thursday night, the YWCA held a vigil in Seitz Park to remember the victim, Amana Scott, as well as others who have died because of domestic violence.

“It’s very shocking to me, and so I had to kind of sit back,” said one of Amana Scott’s friends, Onjanette Dancler.

Amana Scott was killed in a murder-suicide Tuesday, which happened right behind Eshanya Walls’ house. She’s a survivor of domestic violence.

One of them cheered with Onjanette Dancler’s daughter. She remembers Scott as a ‘really sweet lady.’

“She was very down to earth, always smiling , in a great mood,” said Dancler.

But for Dancler, her friend’s death really hits home.

“For me, it shocked me even more, because I’ve been in this situation on the other side of it, because my brother was the assailant and killed his girlfriend,” she said.

So she says she knows how hard it can be for the families that are left to pick up the pieces.

And she says having the community’s support, like with this vigil, is the only way Scott’s daughters are going to be able to move on.

UPDATE: The cheer team pictured in the video is the junior team. Dancler and Scott's daughters were on the senior team.