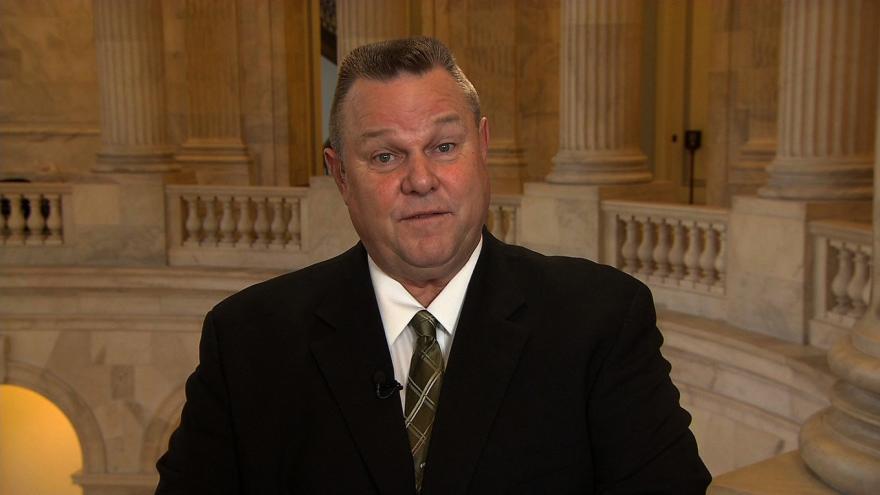 By Matt Korade and Sophie Tatum

(CNN) -- President Donald Trump on Saturday morning called for Montana Democratic Sen. Jon Tester to resign over his opposition to White House physician Ronny Jackson's nomination for secretary of veterans affairs, saying some of the allegations against Jackson "are proving false."

Tester, the top Democrat on the Senate Veterans Affairs Committee, had raised concerns about allegations against Jackson, including that he loosely handled prescription pain medications, was intoxicated during an overseas trip, and created a toxic work environment. Jackson withdrew his nomination on Thursday.

The allegations led to Jackson pulling his name from consideration on Thursday. The swift unraveling of his nomination came amid a litany of allegations from nearly two dozen current and former colleagues against a man whose selection late last month came as a surprise even to him, CNN has reported.

Jackson learned about his nomination just a day or two before it was made public, one official told CNN -- a sign of inadequate vetting that continues to plague the Trump administration's nominations. And on Capitol Hill, Democrats and Republicans questioned Trump's decision, made largely out of his personal affinity for Jackson, and were skeptical the White House physician had the experience to lead the sprawling agency.

In a wide-ranging interview on Fox News earlier this week, Trump said he thought Tester would have a "big price to pay in Montana" over the accusations against Jackson.

"Allegations made by Senator Jon Tester against Admiral/Doctor Ron Jackson are proving false," Trump wrote in a pair of tweets. "The Secret Service is unable to confirm (in fact they deny) any of the phony Democrat charges which have absolutely devastated the wonderful Jackson family. Tester should resign. The.........great people of Montana will not stand for this kind of slander when talking of a great human being. Admiral Jackson is the kind of man that those in Montana would most respect and admire, and now, for no reason whatsoever, his reputation has been shattered. Not fair, Tester!"

Jackson initially did not respond to the full slate of allegations, but denied some of them, including that he wrecked a government car.

"I have no idea where that is coming from," Jackson told reporters at the White House on Wednesday. "I have not wrecked a car. I can tell you that."

On Thursday, when he pulled out as VA secretary nominee, Jackson said in a statement, "The allegations against me are completely false and fabricated. If they had any merit, I would not have been selected, promoted and entrusted to serve in such a sensitive and important role as physician to three presidents over the past 12 years. "

Tester said in a statement Saturday, "It's my duty to make sure Montana veterans get what they need and have earned, and I'll never stop fighting for them as their senator."

The statement noted that Trump has signed several bills that Tester sponsored, cosponsored or otherwise supported that aim to increase accountability at the Department of Veterans Affairs and improve care and benefits for veterans.

After Jackson withdrew from consideration, the Montana senator thanked the service members who "bravely spoke out over the past week" about Jackson. Tester added that it was his "constitutional responsibility to make sure the veterans of this nation get a strong, thoroughly vetted leader who will fight for them."

"The next secretary must have a commitment to reform a strained health care system and a willingness to stand up to special interests who want to privatize the VA," Tester said. "My sleeves are rolled up and ready to work with Chairman (Johnny) Isakson to vet and confirm a secretary who is fit to run the VA."

Trump said in a Fox News interview shortly after Jackson withdrew that Tester might have a "big price to pay in Montana" for opposing the nomination, prompting an official with the the senator's campaign to say he disagreed with the idea that Tester would face backlash from voters.

"Jon's focus from the beginning is making sure we have strong leadership at the top of the VA so our veterans are taken care of. Jon has worked with the president to get 8 bills signed into law on the VA," the official noted. "That is his goal."

"This isn't political for him, it is about doing right by our veterans," he said.

"If you look at what Montana voters are learning about this issue or are reading about it or watching it, they are hearing and seeing Montana veterans praising Sen. Tester for doing his job and looking out for their interests," the aide said, highlighting an article in the Missoula Current that said Tester has the support of some Montana veterans.

A spokesperson for Senate Veterans Affairs Committee Chairman Johnny Isakson said he approved of Tester's handling of the accusations.

"Senator Isakson has a great relationship with Senator Tester," spokesperson Amanda Maddox said. "He doesn't have a problem with how things were handled."

CNN previously spoke to multiple current and former employees at the White House medical unit who described a "grab and go" culture that allowed staffers to get prescription drugs without a medical examination. The five individuals who spoke to CNN said the practice was supported by Jackson.

The White House, however, showed reporters documents on Friday that a White House official claims exonerates Jackson from allegations he inappropriately dispensed pills and wrecked a government vehicle after leaving a Secret Service going away party.

The Secret Service said in a separate statement that it did not find any information to indicate agents intervened when Jackson banged on the hotel room of a female employee while intoxicated on an overseas trip, as four sources familiar with the allegation told CNN the incident did happen.

The incident became so noisy, one source familiar with the allegation told CNN, that the Secret Service stopped him out of concern that he would wake then-President Barack Obama.

Two sources who previously worked in the White House medical unit described the same incident, with one former staffer telling CNN that it was "definitely inappropriate, in the middle of the night," and that it made the woman uncomfortable.

There are other allegations that have not been answered, including that he was allegedly "abusive" to his colleagues and "on at least one occasion" Jackson "could not be reached when needed because he was passed out drunk in his hotel room," according to Democratic staff on the Senate Veterans Affairs Committee.

Trump addressed the situation again at a press conference with German Chancellor Angela Merkel on Friday, in which he called Jackson "high quality" and defended him against the allegations noted by Tester.

"The false accusations that were made about him by Senator Tester -- from a great state, I don't think that state is going to put up with it," Trump said.

The White House continually defended Jackson as his nomination cratered this week. On Wednesday, White House press secretary Sarah Sanders said Jackson's record was "impeccable," and said he had passed multiple background checks, including one conducted by the FBI.