Double shooting during teen dance at the Century Center downtown 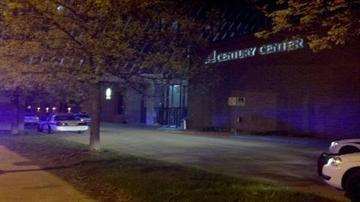 ABC 57 News was the first on the scene to report the shooting, we also broke the news for you on ABC 57.com and Facebook.

The nephew of the D.J. at the dance tonight told us there were about 800 young people inside the Century Center at the time of the shooting.

He told us that he thought it was part of the music at first and then realized it was real when they were told to stop the music. He said chaos erupted with people throwing and running over chairs and heading towards the main doors to escape.

Witnesses said there were people running from every entrance of the Century Center.

South Bend Police Officers were assisted by Mishawaka Police and Indiana State Troopers and treated the scene as a riot situation.

ABC 57 News has been able to uncover that both the victims, an 18-year-old woman named Symone Berry and a 20-year-old male.

Officers told ABC 57 News that both victims were taken to Memorial Hospital. They declined to tell us where the victims were shot. Their names are not being released at this time. Their current medical condition is unknown, although we're told their injuries are non-life threatening.

No suspects have been arrested, several witnesses are being interviewed.

ABC 57 News contacted one of the men who hosted Swagger Fest, he was listed on a website promoting the event.

His name is Benjamin. He exclusively told ABC 57 that he is upset that this happened and they were just trying to offer a fun night for the young people of South Bend.

He said he doesn't understand how, with paid police presence and with the pat down of each person at the door, how this was allowed to happen.

Police Officers said they were not able to comment on if surveillance video was available during the shooting. We were able to notice several cameras outside the Century Center.

Concerned parents and friends showed up after the shooting many were trying to get clothing, purses and cell phones left behind in the chaos, all were turned away and told to come back in the morning.

Stay with ABC 57 News for instant updates on this developing news story.