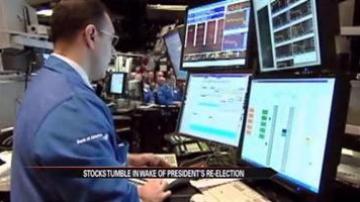 The Dow Jones dropped more than 300 points just hours after opening. While the NASDAQ and the S and P 500 also opened lower.

Investors are concerned over the United States’ financial troubles and how the president will respond to them.

There are also increasing concerns over the European economy putting more pressure on global markets.

Wall Street was pro-Mitt Romney and believed he would be the more business friendly candidate.