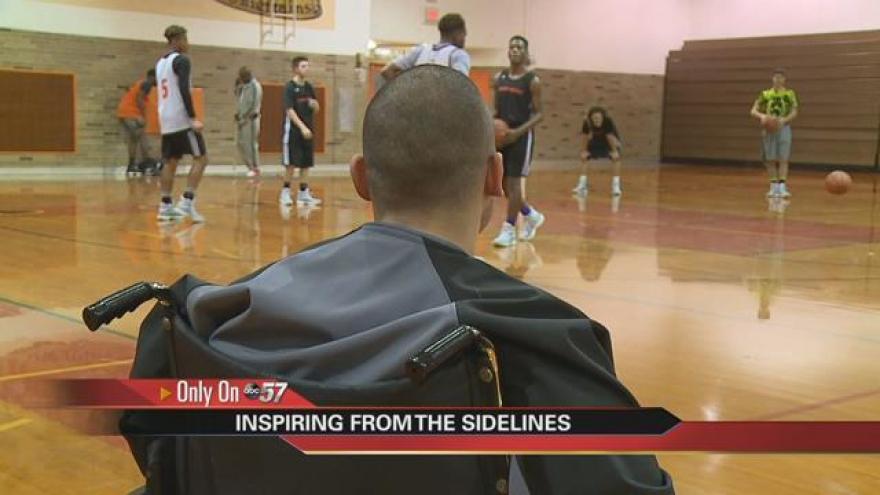 If you’ve been to a Dowagiac Chieftains’ game, you’ve most likely heard of Anthony “A-Train” Davis. He’s usually the loudest one cheering on the athletes in black and orange.

“He’s been a mainstay and fixture with Dowagiac athletics. He has so much enthusiasm and passion. If he had the ability he’d be out there playing with us,” said Varsity Football Coach Mike Stanger.

Davis was born with cerebral palsy and has spent most of his life in a wheelchair.

“Growing up I would have people stare at me, treat me different and they’d ask me ‘what’s it like being in a wheelchair’ and it gets to me,” said Davis.

Davis says he found the acceptance he was looking for within Dowagiac athletics during high school. He began helping the department at practices and games.

“I’m not a 5-star athlete but I can tell you having a disability, I can still make a difference,” said Davis.

Brent Nate is the school’s athletic director and says Davis has a positive impact on the student athletes. After graduating in 2011 Nate offered him a part-time job with the department.

“He’s poured his heart and soul into Dowagiac athletics. He’s always on the sidelines offering words of encouragement. There’s always someone in their corner outside of coaches, their parents or friends. Someone in the community that is looking for them to success and a role model to show them what hard work and determination can do,” said Nate.

Davis says because of the acceptance and support he received, he wants to pay it forward.

“When I can look at these kids and know that I’m doing something for the greater good not only for myself but for other people as well I for one am grateful for the opportunity that is given to me to be a part of something special,” said Davis.