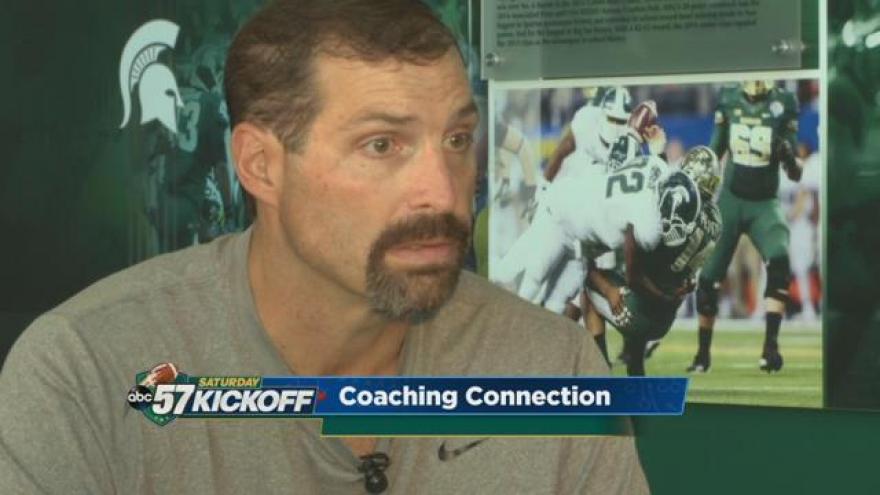 For the second straight week, an opposing coach has strong ties to Michiana. Michigan State offensive line coach Mark Staten, a Dowagiac native, says what he learned growing up in Southwest Michigan laid the foundation for his success.

"It's the things that are important: faith, family, football," Mark said.

One look through the Staten family photos shows a man dedicated to the game.

Jerry Staten, Mark's dad, raised him in a football family.

Jerry was an assistant coach for the Dowagiac Chieftains and Mark played a key role for the 1984-88 teams.

Mark says the lessons he learned from his father were priceless.

"Is not something you really can teach. It has to be something from within," Jerry said.

"A big, big thing that he always talked about was respect the game. And to understand how privileged you are to be a part of it," Mark said.

Mark went on to play at Miami of Ohio and spent two years in the NFL.

Football isn't the only thing he was passionate about. He also had a bit of a career as an actor.

"I don't know if you can call it a career, I stumbled around a while and stood in front of some cameras, but no I had a lot of fun. It was when I was done playing, I needed to step away from the game for a minute and I thought 'Ok, I can teach and coach anytime.' But what did I enjoy growing up? I enjoyed doing plays and doing musicals and things like that in Dowagiac," Staten said.

He played Judd in Oklahoma, was in Music Man and Bye Bye Birdie.

After his professional football career came to an end, Mark still had the acting bug, so he moved to Hollywood.

He landed walk-on roles on an episode of Seinfeld and the TV show Coach. He played a football player on Coach.

"And, you know I did a few fun things and did a pilot and it got picked up but I got dumped so I was like 'Ok, I need football again,'" Mark said.

Although Mark's acting career was short lived, he says he has no regrets.

"I guess I'm a different kind of Hollywood success story. I went out to Hollywood to find my way back to football," Mark said.

Mark Staten isn't the only Spartan with Michiana ties.

Kicker Brett Scanlon is from Dowagiac, Dante Razzano went to Edwardsburg High School and Nick Padla is from Berrien Springs.