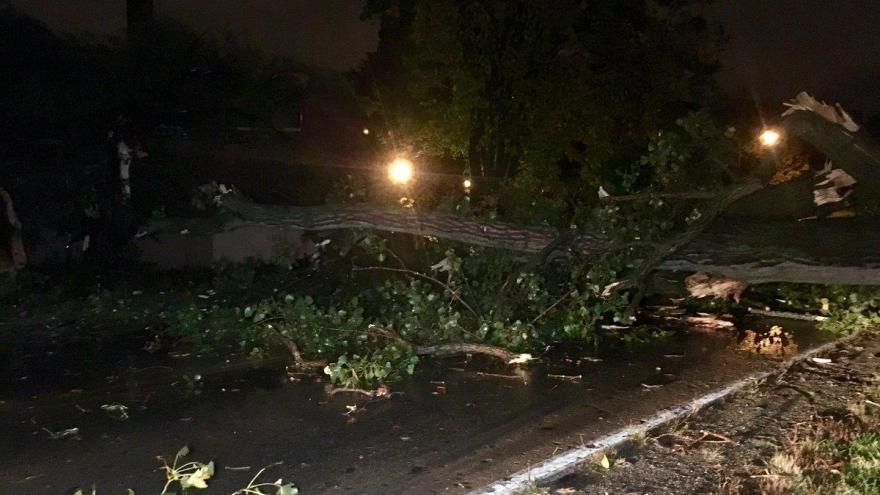 Between 6:30 and 7:00 p.m reports came in of trees down and power outages from South Bend to Osceola. The reports were spotty but the Sunnymede / River Park neighborhood looks to have had the worst of the damage as ABC-57's Sara Rivest reports.

As of Thursday night it's tough to say for sure what caused the damage, be it straight line wind or a very small tornado. The National Weather Service in Northern Indiana will send a damage survey team to assess the damage. That could leave clues to the official cause, depending if the damage lays all in one direction or dispersed in a tornadic nature.

The likely cause of this was a down-burst or being on such a small scale a micro-bust. This is caused when heavy rain cools the air rapidly at cloud level. That (heavier) cooler air rushes towards the ground with gusts that can top 50, 60, 70 even 80 mph. Here's an in depth example found on YouTube.

Radar imagery shows around 6:40 p.m. a heavy rain cell over the east side of South Bend that was moving east. Also plotted is the storm report of trees down near Adam's High School in South Bend. Velocity imagery at the same time shows no signature of strong wind or any tornadic signature. This mean the wind event happened at a very low level, below the radar scan, between the ground and a thousand feet above the surface. Rainfall rates were heavy around this portion of the storm, radar estimates of close to an inch or more. This is the key factor that this was a micro-burst. Why was there no warning? Part of this was due to the fact this was such a small scale event with little radar data prior or after that would have indicated severe weather. Look at the two radar images below, the first at 6:40 p.m and other at 6:45 p.m. The time scale was very short, by the time damage reports came in the could have prompted a warning, the event was over. The intense cell had dissipated and moved east. Our technology is good at tracking severe and life threatening weather. However there are limitations that comes on incredibly small scales of space and time. A good portion of this event happened between scans of the radar and below the beam height.