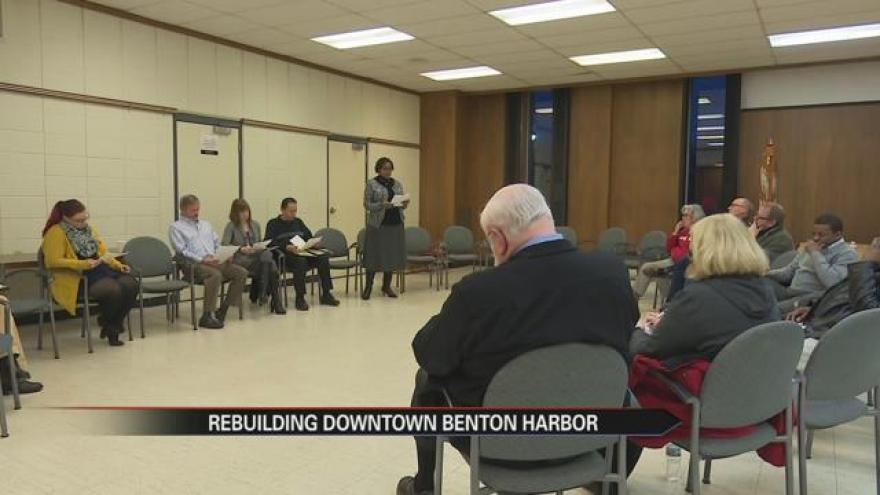 Efforts to revitalize the Benton Harbor’s metro area are underway and Tuesday the community got a first look at what could be a new and more modern downtown.

A big issue has been the lack of accessible fresh food outlets in the city.

The development team is working with the county on a creative solution for that problem and a way to turn downtown into a walkable neighborhood.

“As part of our forums where we talk to people about what they want to see downtown, they brought up the market again,” said Richard Hensel, president of the Downtown Development Authority (DDA).

The DDA held another forum Tuesday night, this time previewing plans that will give residents what they’ve been asking for.

“There’s an opportunity to actually build this pavilion as we call it to shelter the farmers and flea market people and it will be open and useful for other things too,” said Hensel.

Officials are hoping a farmers market in the heart of downtown will inspire more developers to embrace the city.

“I think we’re on a great road to a change, that’s going to help us move forward and people will see that Benton Harbor is moving forward and on the move,” said city commissioner Edward Isom.

But the biggest hurdle in this race to rebuild downtown could be the people’s perception of the city.

“You have to change the culture before you can start asking people to do something,” said resident Ronnie McGee.

But officials are confident engagement will come after investment.

“Creating the impression of a well-kept community makes a difference,” said Hensel.

Hensel says the city has received a $60,000 grant toward building the farmers market.