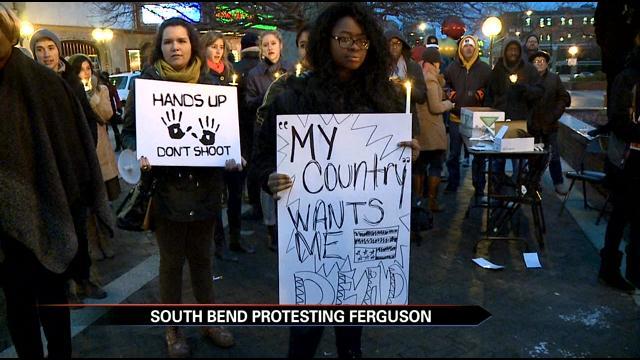 Some people are protesting Missouri's grand jury decision in Michiana.

Over 150 people showed up to downtown South Bend on Wednesday evening to stand up for what they are calling “injustice in Ferguson”.

The people who went were prepared for the most peaceful of protests; at times it was a silent vigil. Signs that read “United for Ferguson” and “Hands up, don't shoot” have been country-wide slogans since Michael Brown was gunned down by Officer Darren Wilson in August.

The protestors were equipped with candles, signs, song and chants.

“What do we want? Justice! When do we want it? Now!” protestors chanted.

Over one-hundred people from Michiana came to use their voice to unify what many see as a divided country.

“I didn't expect a lot of people to come here, this is really, really heartwarming,” said Michaela Warnsley.

Warnsley said she came out to express herself, which is her constitutional right and she said it specifically important to exercise the right at a time when they say their freedom is under fire.

“The anger and frustration about the society that we live in. It's different than the one my parents grew up in but in many ways it's the same,” said Warnsley.

She said she was in downtown South Bend chanting “injustice,” because the cop who killed Michael Brown was not tried according to the law as it is written.

“Just the fact that there wouldn't even be a trial to see if he was guilty or innocent,” said Warnsley.

Mayor Pete Buttigeg, of South Bend, issued a statement to answer the peaceful protest. He promised to keep an on-going working relationship between police officers and the citizens of South Bend.

“When you have the community scared of the police, that makes the job of a policeman dangerous,” said Gerrie Casey.

Chief of South Bend Police Department said what happened in Ferguson is absolutely an incident that will shed light on the faults in the nation.

“It is an on-going conversation that we need to have as far as the racial tension in this country,” said Chief Ron Teachman.

While Warnsley said she is disappointed in the lack of progress she feels Americans have made, she is proud of her current community who devoted their night to send a message at home.

“Very, very proud of my city, of my hometown,” said Michaela Warnsley.