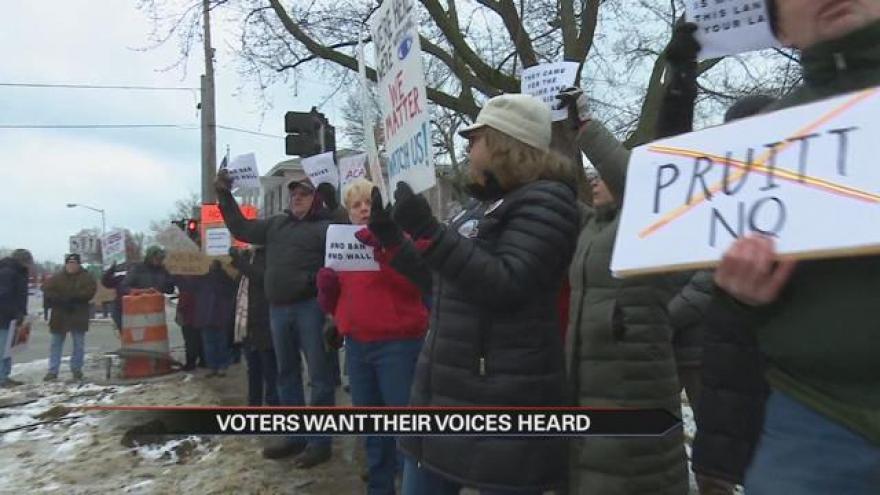 “No hate! No fear! Immigrants are welcome here”

Those were some of the cheers chanted outside Congressman Fred Upton’s district office in St. Joe, Michigan Tuesday.

About 80 people gathered to make their voices heard.

“We’re here today to just express to Representative Walorski that in spite of Trump winning the district – presidential election – and the district too, that there are many, many constituents who are opposed to the repeal of the ACA [Affordable Care Act],” Cheryl Nix, who organized the event through the Michiana Alliance for Democracy, said.

“I think it’s important that we show our support for all refugees and anyone feeling persecution and that needs to come to the U.S. for safe asylum,” Amy Tevault, of Stevensville, said.

“My biggest concern is the fitness that [Donald Trump] has for the office,” Don Goldsmith, of Edwardsburg, said. “I think that he is mentally ill. I think he is malignantly narcissist. And I think he needs to be removed as soon as possible.”

Patrice Grant, who organized the event in Berrien County, said demonstrations will happen outside Congressman Upton’s office every Tuesday through President Trump’s first 100 days in office.

“This is a positive movement,” she said. “It’s not ‘get rid of Trump or whomever.’ It’s ‘defend the vulnerable people in our society and uphold the American values.’”

At Congressman Walorski’s office, demonstrators had a more pointed plea to not repeal Obamacare without a solid replacement.

“I have two family members who get their medication through insurance that they’ve gotten through the ACA, and if that goes away, they won’t get it,” Barbara Fredman, of Granger, said.

“We’re calling for a town hall,” Nix said. “As you can see by the large crowd today, the need is there.”

Both were peaceful demonstrations filled with passion.

In response to the demonstrations, both Congresswoman Walorski and Congressman Upton released statements.

“Obamacare is a failed law that is hurting people right now with skyrocketing premiums and dwindling options…I welcome all input from 2nd District Hoosiers on how we can lower costs, increase choices, and strengthen protections for patients,” Congresswoman Walorski said.

“Free speech and the right to assemble are critical to our democracy and I appreciate hearing from all perspectives. We always have held live tele-town halls which allows thousands of constituents to ask me questions and get answers…I have a long record of supporting Democrat presidents when I thought they were right, and not being afraid to oppose Republican presidents when I think they’re wrong,” Congressman Upton said.