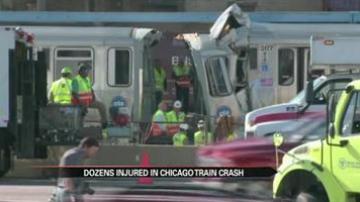 CHICAGO -- Nearly 50 people were on board a train near Chicago when it was hit by an empty runaway train.

WLS reported at least 48 people on board the "blue line" car were injured.

The crash happened just before 8:00 Monday morning near the Harlem Avenue stop.

A stopped west-bound train was hit head on by an east-bound train. Officials are investigating how both trains were on the same track.

"I've had 25 years of driving experience and I’m not going to second guess what I think could have happened because you think you've seen it all and then all of a sudden something new pops up," said  Robert Kelly of the transit union.

Chicago Transit Officials say they do not suspect foul play.

Service on parts of the blue line was suspended for much of the morning.