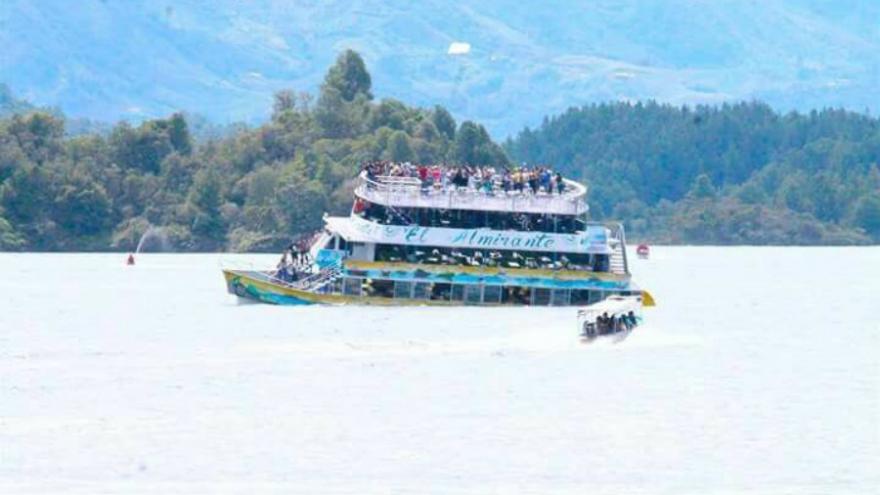 (CNN) -- The Colombian Air Force, Army, firefighters and divers combed the waters of a man-made lake in the resort town of Guatape on Monday, looking for dozens of missing people who were lost when a tourist boat sank the day before.

Authorities said Sunday that at least six people had died and about 122 of the roughly 170 on board had been rescued. 31 people were still missing. Colombian officials originally said nine people had died, but later lowered the figure.

The incident happened about 45 kilometers (28 miles) east of Medellin, one of Colombia's biggest cities.

The search for the missing continued Monday after thunderstorms forced rescue teams off the water last night. Colombia's President Juan Manuel Santos said the search would resume at first light.

The boat, emblazoned with the name El Almirante, started taking on water while transporting passengers in the reservoir by Guatape.

Video on social media shows the multitiered tour boat tilt from one side to the other before the lower decks submerge.

Visiting the scene Sunday night, President Santos said the focus was on rescuing survivors, and that questions about why the boat sank would come later.

"At the moment, we have no information to establish why it sank," Santos said.

The Colombian leader said that, based on information provided to him, the boat wasn't overcrowded.

Lorena Salazar, a survivor of the incident, told CNN affiliate CableNoticias that there were no life vests on board the tourist vessel.

Local officials in Guatape invited people to honor the victims by bringing a light to the town's famous Sembradora de Sueños ("the Dream Planter") statue, which is located by the water.

By early Monday evening, mourners were already leaving flowers and signs in memory of the victims.