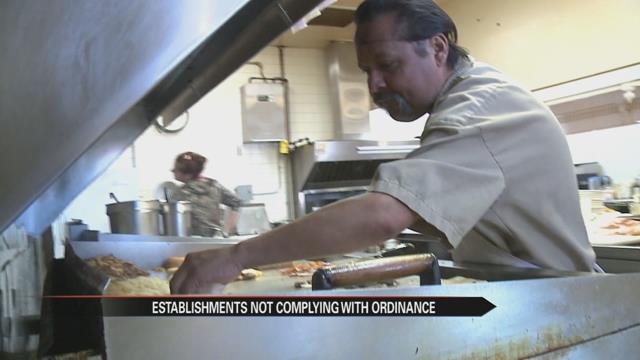 Close to 100 food service establishments in Elkhart were invited to a public works meeting regarding the city’s fats oils and grease ordinance. City officials describe the turn out as dismal, as only one establishment showed up.

The meeting discussing the FOG ordinance was meant to clear up any confusion and find out why many are not registering their grease traps.

The ordinance was originally created to reduce the amount of fats, oils, and grease clogging the sewer lines. Now city officials say those ignoring the law could face fines.

“Not that I’m aware of this is the first time I am hearing about it,” says Robert Johns of the Fraternal Order of Eagles #395.

Johns is the secretary of the club and says he has no idea why his organization is on the notice of violation list.

“We don’t do no cooking here,” says Johns.

Johns says they have a fryer but they don’t use it.

He says they primarily serve drinks. So he’s confused as to why the club is even on this list.

Lucky’s Donuts is an establishment that does use their fryer and is also on the notice of violation list.

“Is there a reason why you didn’t show up this morning?” asks ABC57.

“No there was no mail sent to me that we were on that list,” says the owner.

On Tuesday morning 92 food service establishments were supposed to show up at city hall to answer why they aren’t registering their grease interceptors.

“Maybe they are ignoring us or not understanding what the requirements are,” says Larry Meteiver the city’s attorney.

Meteiver says El Paraiso, a grocery store and restaurant, was the only establishment to attend Tuesday morning.

The owner of El Paraiso says the meeting was easy.

He hadn’t completed the registration beforehand and it only took a few minutes to clear up the mistake.

“I think we are in somewhat of an educational phase but at some point it’s going to have to shift over to an enforcement phase,” says Meteiver.

Meteiver says another ordinance would have to be drafted to start sending out fees to those ignoring or not understanding the new law.

Neil Allen owns Allen's Bristol Street Cafe and says hearing the future of FOG in Elkhart makes him grateful that he installed a new grease trap and registered it with the city.

“Shame on them because they are going to get a fine if they don’t do it,” says Allen.