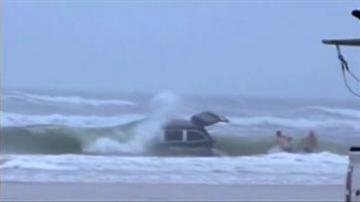 DAYTONA BEACH, Fla. -- Four family members are safe after they were rescued from the surf on Daytona Beach. The dramatic rescue was caught on camera.

Investigators are trying to figure out how the minivan wound up in the surf.

Lifeguards on the beach sprinted into the waves to save the three children and their mother who were inside the minivan.

The tide made it difficult for rescuers to save the kids and nearly caused the mother to be dragged under the car.

Police say the mother was incoherent when they tried to speak to her right after the rescue.

The children are with the Department of Children and Families.