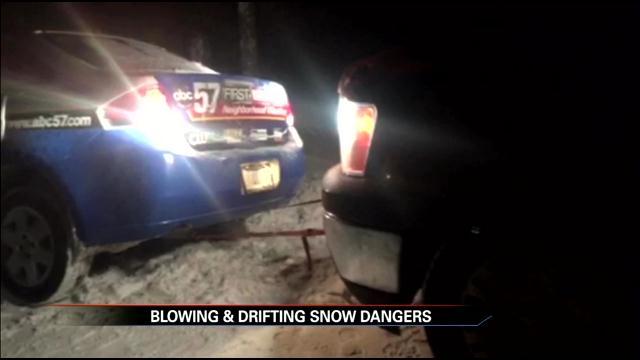 The wind was not only whipping flags, but also that light, powdery snow sitting on the side of almost every roadway in Michiana.

The wind caused the snow to drift and cover roadways and cause white out conditions for drivers.

“It happens a lot,” said Lieutenant Tim Williams of the Mishawaka Police Department.

Like many others, ABC57's Stephanie Johnson learned the hard way. She pulled over to get a closer look of the drifting snow on Bittersweet Road in Mishawaka when the drift pulled her in.

“We're lucky enough we have some great Samaritans that will stop by and pull you out of a lot of your slide offs which has been tremendous today,” said Lieutenant Williams.

He said the helping hand has been a true life saver for police who often get called to help handfuls of stuck cars each day.

Some Good Samaritans yanked the ABC57 car right out of the snow.

“These road conditions aren't even close to being ideal,” said Williams.

The drifting conditions caused one side of the road to have nearly a foot of snow while the other with less than a couple of inches.

With the blistering winds, it is a problem tons of drivers are facing, so Williams has one piece of advice for drivers out there.

“We just need all the drivers to be aware that if they see a car stuck on the side of the road or see someone stopping to help to slow down and move over so they can get that car out safely,” said Williams.

He also said the key to driving in the conditions with the possibility of seeing someone else stranded on the side of the road is to just drive slow, and that even twenty miles an hour is too fast in these conditions.