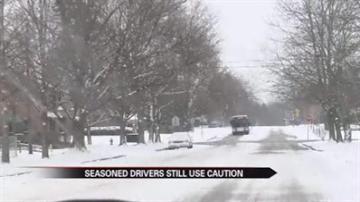 MISHAWAKA, Ind. -- They say practice makes perfect and that even applies to driving in the snow. A driving instructor wouldn’t send his students out on the road Thursday morning because he says many licensed drivers don’t know what they’re doing.

Bill Wagner knows how to drive in the snow. He's been teaching the ways of the road for over forty years.

"Oh they'll tell you, ‘I can stop on a dime.’ Well it might take two dimes instead of one,” said Bill Wagner, President of Frick’s Driver Education School.

It sounds obvious, but people forget it all the time. When roads are covered in snow, it takes longer to stop. The distance between your car and the next should be 3 seconds on a normal, summer day--let alone when conditions are poor.

"Rain would be one more, snow two, ice would be three so you should be six seconds behind the vehicle in front of you if you're on ice,” said Wagner.

He's tired of the overconfident drivers--those who think just because they're from Michiana, the snow shouldn't slow them down.

"I'm a good driver because I grew up driving in Indiana,” said Kelly Priebe, driver.

"I'd say I'm a pretty good driver. I grew up around this area my whole life and dealt with plenty of snow,” said David Fish, driver.

Even if you think you're a pro in the snow, the coach says "take it slow."

"A person went by me about fifty miles an hour. Half a mile down the road they slid off the road and were sitting in a ditch,” said Wagner.

"Make sure that you're taking the corner at a slower speed then what you normally would and just being a little more cautious when you're starting out, instead of trying to start out fast,” said Dale Dabrowiak, driver.

Remember: if you start to skid, what you should do depends on what type of vehicle you have.

If your car is rear-wheel drive, steer into the direction you're skidding.

If your vehicle is a front wheel drive, steer the way you want to go.